Harry, thanks for taking the time for this interview. Could you start by telling us something about yourself? I was born in The Netherlands and immigrated to Canada when I was 13 in 1951. I attended Calvin College in Michigan, USA from 1961-1965, where I earned a BA degree in philosophy and the classics. I married Jenny soon after graduating. In 1967 I enrolled at the Free University of Amsterdam in a Clinical Psychology program. I earned a doctorandus degree in 1971 and a PhD degree in 1980 in Clinical Psychology. Upon our return to Canada I worked as a psychologist at the Brockville Ontario Psychiatric Hospital. In 1977 we moved to British Columbia where I founded the Cascade Christian Counseling Centre in Surrey and served as its first psychotherapist for 5 years. From 1982 -1992 I taught psychology at Redeemer University College in Ancaster, Ontario and did the same at The Kings University College in Edmonton, Alberta from 1992- until my retirement in 2000. After my retirement I mainly kept busy writing, public speaking and continued to maintain a private therapy practice. I have been married to Jenny for nearly 50 years. We have 3 children and 4 grandchildren. You can access my website for more information via all of life redeemed

How did your interest in psychology start?

While at Calvin I took an Introduction to Psychology course. I have been a Christian all my life, so I naturally asked the instructor about the relation between Christianity and psychology. He could not give me a satisfactory answer but promised to give me extra credit if I were to write a paper on it. After writing 4 or 5 successive drafts on the relation between religion and psychology in my spare time over a number of years I realised that this is an exceedingly difficult and complex question which would take a life time to answer. By then I had decided to make psychology my life work.

Who are the major influences on you?

Philosophically my main influence was through the Calvin prof. Dr. H. Evan Runner, who was the convenor of the Groen (Van Prinsterer) Club, in which students wrote and discussed papers on the relation between religion and life. He introduced me to the Christian- neo Calvinist philosophies of Vollenhoven, Dooyeweerd, Mekkes, Zuidema a.o. In clinical psychology it was my mentor and friend Prof. Dr. Henk Wijngaarden and through him Carl Rogers who had the most influence on me, not so much in what they taught, but more in who they were. It was Henk’s humanity that impressed me, and Rogers’ ability to really listen to his clients in therapy. Through them, I suppose, I was more generally influenced by phenomenological and existentialistic psychologists, for the most part because they took the subjective experience of clients in therapy seriously. Runner was also instrumental in my decision to study at the Free University of Amsterdam. The program at the Free was unique in that whenever a new psychological concept or therapeutic technique was introduced it always was presented with its historical origin in and the philosophical background that gave rise to the insight or the technique. It instilled in me a habit to do the same in my research and teaching.

You have had your book recently published by Dordt Press, could you tell us a little about it? 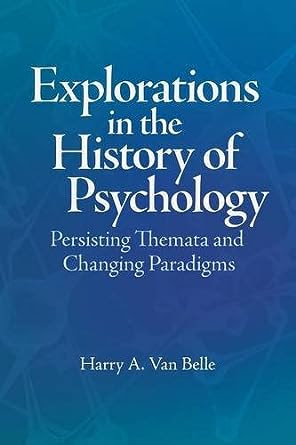 Yes, it is a book on the history of psychology. It is called, Explorations in the History of Psychology: Persisting Themata and Changing Paradigms. This book traces the history of psychology from its roots in Greek philosophy onward and includes a description of the later influence of the Hebraic-Christian mindset on that history. Subsequently, it follows the journey of philosophy/psychology through the Middle Ages and the Enlightenment of the sixteenth century. The book describes the latter historical-philosophical movement as the development of Scientific Rationalism, (British Empiricism, French Sensationalism, and Positivism) which forms the philosophical background for experimental psychology and the development of Metaphysical Rationalism, (Continental Rationalism, Idealism, and Romanticism) which forms the philosophical background for clinical psychology. Next, the book describes the birth and trajectory of psychology proper during the nineteenth century and closes with a description of a number of the more contemporary schools of psychological thought.


This book is the product of many years of teaching the history of psychology to university students in North America and Africa. The book is unique in that it uses an adaptation of “the problem-historical approach” to historical research. This method was developed by D. H. Th. Vollenhoven (1892-1978) who was professor of philosophy at the Free University of Amsterdam from 1926-1963. Vollenhoven developed this method in his study of the history of philosophy to locate and catalogue the various philosophical conceptions found in the history of Western thought from Ancient Greece to the present Each chapter of the book ends with a series of issues, culled from the material of the chapter. These are designed as discussion topics for students taking a course. Their intent is to turn the course into a dialogue rather than a lecture-and-note taking exercise. This text can be assigned as the main source, or as added required reading for a course in the history of psychology. In view of the fact that a big portion of the text is devoted to the philosophical background to the history of psychology proper this text lends itself equally well as required reading for a course on the history of philosophy, and has already been used as such.

The emphasis in the book as the title suggests is on the history of psychology. Why is history so important in psychology?

There are two courses taught in a psychology program that are essentially perspectival in nature. Those are Theories of Personality and The History of Psychology. They functions as ‘brown paper bags’, so to speak, that contain the facts of the discipline. Personality theories explore and expose the underlying views of human life usually hidden in psychological research. Histories of psychology lay bare the meaning of concepts psychologists use today in terms of their historical origin. The essential function of both is to elucidate the vocabulary of psychology.

Are there any particular psychology paradigms that comport better with a Christian worldview than others?

I suppose that phenomenological paradigms resonate more with a Christian worldview than cognitive or behavioural ones because they are less reductive in nature. However, because most theories in psychology are empirical in nature, they all contain at least some kernel of truth, or limited insight that can be mined as a valuable ingredient for a Christian view of psychology. The trick is to identify this insight without adopting the non-Christian ideological paradigm in which it is contained. So, how do faith and psychology relate? All psychological theories are faith based, if by “faith” we mean that which psychologists live out of and unto. We can learn from non-Christians theories something other than what a given theory may be trying to teach us. My first book, Basic Intent and Therapeutic Approach of Carl R. Rogers, a study of his view of man in relation to his view of therapy, personality and interpersonal relations (available from my website) illustrates my method of analyzing and interacting with the theories of therapy down to their religious depth, or basic intent. This requires a patient reading and re-reading of a theory over long periods of time until one knows in one’s bones so to speak what the author is up to with his/her theory. It is at that religious depth level that one can engage other theorists in a dialogue about differences in religious/idiological paradigm. This approach also allows one to distinguish the therapeutic insights from the (non-Christian) perspectives which contain such insights.

What advice would you give to Christians who want get involved psychology?

Someone once gave me the greatest compliment of my career. She said:” You are not much of a psychologist, but you are a real human being.” My advice is, “ Psychology, is a great field to study because it deals with human beings and they are fascinating. But make sure you do not become a psychologist.”

Are there any other projects in the pipeline?

and skirts don’t talk with jeans, why they should and how they can. The thesis of the book is that because of globalisation and information technology there is a disconnect between younger people and older people today. They do not understand one another because they are not like one another. The book is my attempt to explain younger people to older people. I am currently working on another book, which attempts to explain older people to younger people. It is tentatively called, Everything you wanted to know about adult life, but have not bothered to ask, a book for people under thirty about life after thirty.

What do you do for fun?

I love talking with young people in their teens and twenties because they are not like me. I also love traveling to strange places. This is because I love the otherness of others. Beyond that, I like to paint, to make and to drink (red) wine, to fish, to smoke and eat salmon, to hike and to bike (not so much), and to play with my grandchildren. Apart from the occasional aches and pains, life at 77 is good, kind of like being on vacation before I am allowed to go Home.
at 8:30 pm