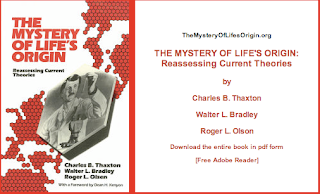 My mum died on Sunday - this is the reason for the lack of recent blogging. Among her things I came across an "Active Service" Testament, which must have belonged to her uncle who died in WWI. In it was this letter: 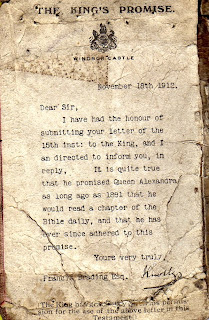 I have had the honour of submitting your letter of the 15th inst; to the King, and I am directed to inform you, in reply. It is quite true that he promised Queen Alexandra as long ago as 1881 that he would read a chapter of the Bible daily, and that he has ever since adhered to this promise.

For Us and for Our Salvation - book review 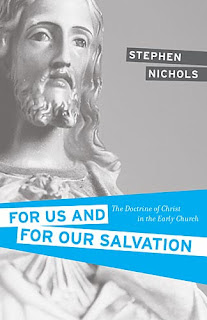 
I bought this book on the strength of one effusive review. I wasn’t disappointed.

For many Christology and the early church is a boring topic – there are too many –isms (or should that be –wasms) to get confused with. If that is your view then a read of Nichols's book will be an ideal antidote. He has a habit of making complicated ideas and theories accessible and fascinating – boring it’s not. Church history can be fun!

The book comprises six chapters. Chapters 2, 4 and 6 consist of selected key documents from the proponents and advocates for the views he discusses in the odd numbered chapters.

The first chapter looks at the early centuries. The baddies here are the Ebionites, Marcion, Valentius, Theodotus the Cobbler, Paul of Samosa, ‘Praxeas’ and Sabbellius; the goodies: Ignatius, Irenaeus, Tertullian and Hippolytus. During this period the issue was the divinity of Christ (denied by the Ebionites, the adoptionists such as Paul of Samosa and Theodotus aka the Cobbler)) and the humanity of Christ (denied by the docetists such as Valentius and Marcion).

I particularly appreciated the placing of these heresies within the cultural milieu. The ground motive of Platonism has much to answer for. As Nichols puts it:

The docetists, imbibing too much Platonism for their own good, simply could not allow for a human, fleshly Christ. (p 33)

Before 312 AD the enemies of orthodoxy were largely without, since then the enemies of the church have also been within. Chapter 3 looks at the issues surrounding the ‘battle at Nicea’ (325).

Here the hero is Athanatius and the villain Arius. The debate seemingly over the inclusion or not of a single letter i: homoousias (Athanasius) or homoiousias (Arius).

Contrary to Dan Brown and the DaVinci Code the vote at the council of Nicea was not close – only three voted against, when between 250 and 300 bishops voted for. It did not mean that Jesus’ divinity was established by a vote; it confirmed and strongly affirmed what the vast majority of church fathers knew anyway.

The Council of Nicea didn’t fully settle the issue it was six decades before the Arian influence declined and orthodoxy triumphed. Fortunately Athanasius had some allies: the Cappodocians, Gregory, Basil and Gregory. Jesus' divinity and humanity was affirmed; this however led to a new set of problems which leads us to Chalcedon.

Chapter 5 looks at Leo the Great and Chalcedon. The Chalcedon Council brought together ' the two natures of Christ, his full humanity and his full deity, into one undivided, unconfused and unmixed person' (p. 99): two natures in one person. Leo was no stranger to danger - he faced Attila the Hun and came out unscathed. More intellectual enemies were the Appollinarians, who he faced in the lead up to the Council of Chalcedonin 451. Apollinarius (d 392) and his subsequent followers maintained that Christ has one nature and one person, 'a God-man without a clearly defined and distinct humanity and deity' (p. 103). The Cappodocian Fathers had battled with Apollinarianism, but despite that Apollinarius's teachings still found a stronghold among some. The Council of Chalcedon was to deal a death blow to the Apollinarians and Leo's formulation of two natures in one person' was to prevail. The story is well told by Nichols, who manages to make it live.

This is an excellent primer on the early Christians creeds and Christology. I highly recommend it as a great place to start. The addition of primary sources is an extra treat and this provides an accessible way into the Church Fathers.

Available in the UK from:

The Templeton Foundation are asking big questions: Does science make belief in God obsolete?
The responses include: Yes, if by ... from Steven Pinker, No and yes by Cardinal Schonborn, Absolutely not! by William D Phillips, Of course not by Mary Midgeley, No, but it should from Christopher Hitchens and Yes by Victor J Stenger.
at 5:19 pm No comments:

Email ThisBlogThis!Share to TwitterShare to FacebookShare to Pinterest
Labels: science-religion

There is some debate on the origins of the term post-charismatic, the title of Rob McAlpine's book (see my review below). Apparently jonnybaker and Doug Gay used it in their book Alternative Worship and Gerald Coates used it in 2001, Timothy Miller edited a book with Postcharismatic in the title, but the first use could perhaps be traced back to John Wimber who used it in the eighties (unless anyone knows otherwise?).

Here are some reviews of Post-charismatic?:
Any others? 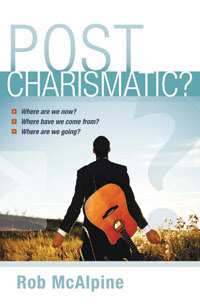 I would regard myself as a post-charismatic. I’ve been involved as a leader in a small independent house church and then moved to a much larger house/ new church that eventually became part of Gerald Coates's Pioneer movement. There were a number of reasons why I left, not least being the power struggles and latent dualism. I joined the local Anglican church – where I still belong. Most who have left the charismatic movement have become disillusioned and have given up on church if not God. It is to these people that McAlpine’s books is addressed. It is a timely message.

He starts by giving a brief overview of the history of the charismatic movement. A number of key people are omitted (this is inevitable in something less than a PhD thesis! Notable omissions are Edward Irving and Alexander Boddy). It is a good sympathetic overview. He traces its origins from Wesley, through the Keswick-holiness movements to the birth of the Pentecostal churches through the 60s/70s charismatic wave and then the more Reformed third wave of Wimber et al.

McAlpine then looks at several of the excesses of what could be called charismania. These include the Latter Rain movement, Prosperity and healing, and Covering and authority. Each of these takes up a chapter. What I found fascinating was the influence of the Latter Rain teachings in subsequent movements. The Latter Rain 'prophets' included William Branham, George Warnock and Franklin Hall; the teachings that had a lot of influence include:
An interesting question would be where did the "Latter Rain" get these ideas from?

The final part, Spirit and praxis, seeks to reflect on these excesses and bring pastoral insight for those hurt by them. McApine writes carefully and irenically even when criticising the excesses - he does it out of a heart of love. There is no doubt that God has moved through the charismatic movement. He has used it to restore a sense of worship and intimacy. The danger is that these gains can easily be lost in the excesses that all too often it demonstrated. McAlpine writes to all those disillusioned with the charismatic and seeks to provide a way for them to reintegrate the Spirit and word. Without one we dry up and without the other we blow up.

Available from:
Equipping the Church (Kingsway)
Amazon.co.uk
David Cook Distribution Canada
Amazon.ca
at 7:47 am 2 comments: Links to this post

This week's Comment has an interesting piece on technology by Wan Phek How of Regent College: 'Good technology. bad technology: how do we tell the difference?'. He asks:

Are these criteria—uninterrupted availability, personalization, standardization, modularity, ease of maintenance—sufficient to determine whether or not a particular technology is ultimately good?

Email ThisBlogThis!Share to TwitterShare to FacebookShare to Pinterest
Labels: science-religion

This is a brilliant spoof advert for Frank Viola's book Pagan Christians.
See my review here.

... a new book on worldview by Mike Goheen and Craig Bartholomew:

[HT Dave Beldman]
at 3:56 pm No comments: Links to this post

Our World Belongs to God

Jon Swales has found an on-line version of this contemporary statement. (click on the image for the link)

In a Christian school I used to teach in we used to say the first part of this as part of our school assembly.

1. As followers of Jesus Christ,
living in this world—
which some seek to control,
but which others view with despair—
we declare with joy and trust:
Our world belongs to God!

Email ThisBlogThis!Share to TwitterShare to FacebookShare to Pinterest
Labels: worldview 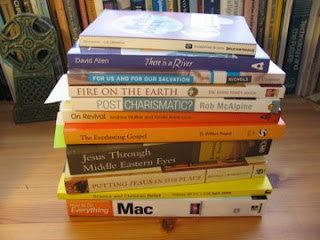 Jack Van Meggelen has translated Abraham Kuyper's Days of Glad Tidings - Pentecost (with Ascension Day) vol. III (translated from Dagen van Goede Boodschap -Op den Pinksterdag (Met Hemelvaart). J.A. Wormser: Amsterdam, 1888). It is now available on All of life redeemed at the Kuyper pages.
at 9:38 am No comments: Links to this post

Mark Roques is interviewed by Amy Stock on schoolswork. If you click on the orange 'listen now' button, it will open up this - click on the may podcast - Mark starts about 3 minutes in. 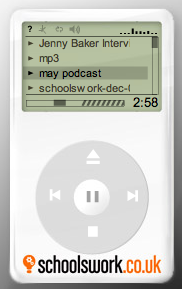 Update: click on mp3 and you'll hear the full interview with Mark.
at 10:58 am 3 comments:

I have now added the Mike Goheen pages to All of life redemeed. (My thanks for the help to Dave Beldman.)

Mike is professor of Worldview and Religion Studies at Trinity Western University, Langley BC, Canada. The site includes links to most of Mike's papers that available on-line. Including his PhD dissertation on Lesslie Newbigin.