It's that time of year again - the time to compile 'best of' lists. I was thinking of my best books of 2009 and most of them weren't published in 2009. I'm a bit slow catching up with my reading - and then along came a whole tranche of excellent books towards the end of the year. So, my best books, in no particular order:

We had a great time at the WYSOCS AGM last Saturday.

Mike Goheen spoke three times over the weekend. The first session was on globalisation. He took a refreshing approach.   Globalisation is the outworking of the cultural mandate, to spread out spatially and globally - however, it has become distorted and misdirected. It has become shaped by economic idolatry. It has deep religious roots that can't be ignored.

His second session was on Newbigin and his desire for the 'laity' to fulfill their cultural callings. This session crystalised a numebr of key themes for me, discipleship, mission and worldview. Below are some of my notes for this session.

Unfortunately, I missed the third session on Sunday evening.

Mission: all of life bears witness to the gospel. Jn 20:21
God's people are a sent people - we can distinguish certain aspects

The latter he saw as the primary witness.

It's the primary witness, but it is the most neglected. It is also one of the hardest things to put into effect.

The church “must equip its members for active and informed participation in the public life of society in such a way that the Christian faith shapes that participation” (Newbigin Public Truth).

". . . a farmer who farms his land but neglects to say his prayers will be certainly condemned by Christians as failing in his duty. But a farmer who says his prayers, and allows weeds, bad drainage, or soil erosion to spoil his land, is failing in his primary duty as a churchman. His primary ministry in the total life of the body of Christ is to care rightly for the land entrusted to him. If he fails there, he fails in his primary Christian task"  (Newbigin 1952 The Christian Layman in the world and in the Church).

How can we do it?

Formation of structures that equip for callings

Apparently today is the centenary of the birth of Lesslie Newbigin. To celebrate the fact Lawrence Osborn of Theosblog has posted an appreciation.

Robert Bradshaw has recently been adding pdfs of the journal Reformation & Revival. Recently added are two contributions from Mike Goheen - both not unrelated to Newbiggin:

Mike is at WYSOCS this weekend.

The Religious and Historical Roots of Globalisation

This Lecture is scheduled as part 2 of the WYSOCS Charity’s AGM event. The AGM is part 1 and Lunch is part 3. All are welcome.

A Neglected Aspect of Congregational Care: Newbigin's Plea for Training Laity for their Cultural Callings

Dessert and Coffee will be served from 7pm.
Clergy, elders and deacons especially welcome!

Reading the Bible as One Story

A light supper will be served at the end of the evening.
Students especially welcome.

Creation out of Nothing by Copan and Lane Craig

Creation out of Nothing: a Biblical, Philosophical and Scientific Exploration
Paul Copan and William Lane Craig

Creatio ex nihilo (creation out of nothing) is an important doctrine that has come under fire in recent decades from theologians such as Gerhard May and scientist-theologians such as Ian Barbour. May contends that creation ex nihilo is biblically ambiguous and that it was a second-century response to Gnostic ideas; Barbour rejects it in favour of an absolute dependence of the universe on God.

It is in response to these ideas that Copan and Craig have teamed up to write this inter-disciplinary book. They show that creation out of nothing is biblical, and scientifically and philosophically grounded. They don’t explore the rich theological implications of creatio ex nihilo but do show that there is a very strong cumulative case for the doctrine and contra May it is a thoroughly biblical one.

The first three chapters explore the Old Testament, the New Testament and much of the extra-biblical evidence. At times these chapters read like a rich mosaic of commentators, but the conclusion in each one is that creation out of nothing is not a second-century invention; it is implicit in both testaments as well as explicit in the Jewish and early Christian writings.

The second half of the book (chapters 4-8) deals with scientific and philosophical arguments. Chapter 5 exposes the error that many – such as Barbour – make in conflating conservation and creation: ‘Creation is distinct from conservation in that creation does not presuppose a patient entity but involves God’s bringing something into being’ (165).

Chapter 5 explores the problem of the creation of abstract objects such as mathematics concepts. They examine three possible solutions: absolute creationism (which seems to be anything but absolute!), fictionalism and conceptualism. They conclude that much creative work is being done and still remains to be done on this issue; hence, they are not prepared to pronounce judgment over which solution is the most plausible. (I’m tempted to say none of the three they mention!)

The impossibility of an infinite past is explored in Chapter 6. Chapter 7 examines two broad lines of scientific evidence that the universe is not eternal and that it had an origin a finite time ago. The first of these evidences is the expansion of the universe and the standard big bang model of creation; the second, thermodynamics.

The final chapter examines naturalistic alternatives to creation ex nihilo; namely, that the universe created itself and that the universe sprung into existence uncaused out of nothing. Here they ably show the fallacious nature of these arguments.

One need not agree with all their arguments, but Copan and Craig have provided an excellent, inter-disciplinary and timely cumulative case for creatio ex nihilo.

Cornelius Hunter on a major cause of global warming: hot air 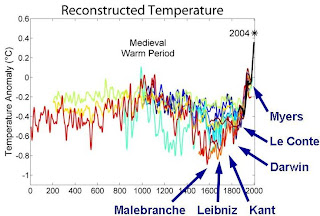 '[H]ot air emitted by evolutionists' is the cause of global warming, claims Cornelius Hunter. It  must be true he has a graph to prove it (above)! 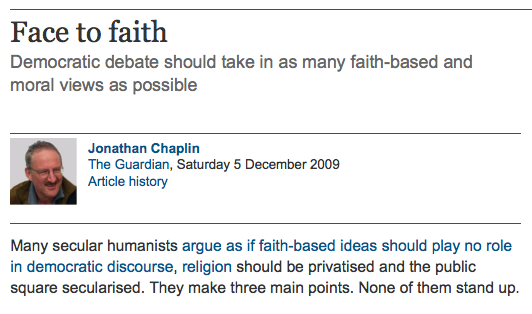 Darwin, Creation and the Fall: epilogue

Epilogue: the sea of faith – Darwin didn’t drain it R. J. Berry and T. A. Noble

Taking a metaphor from Matthew Arnold's 'On Dover Beach' and popularised by Don Cupitt, Berry and Noble maintain that faith is still unscathed by Darwin's ideas. This book is an attempt to show that. Even tricky doctrines like the fall and Adam and Eve can be salvaged in the light of Darwin.  But I wonder at what cost?

The strength of this book is that within a narrow range we have diverse views. Some see the fall as a cosmic event, others as an an event without cosmic implications, but an event in time nonetheless. Adam has different roles, for Blocher he is an historic person, for others they 'cannot rule out the existence of a historic Adam'. For some Adam is the ancestor of us all for others he is a federal head. However, this range of views is a weakness of the book. There is sadly no discussion and critique of each other's views. There is no attempt ot come to a consensus.

Throughout the book the views of Patricia Williams and Christopher Southgate are briefly mentioned and critiqued. Their shadow is felt.  It would I would have liked to have seen a fuller engagement with their work. Next to Darwin and Augustine, their names occur most often in the index. And it is their work that has most recently outlined the evolutionary challenge to a traditional Christian theology of the fall.  Williams dismisses it and rewrites theology, whereas Southgate rejects a historical fall as being a 'spurious reading', a general condition rather than a chronological event.

The unexpressed presupposition is that Darwin was largely right and evolution is correct. However, they don't express which view of evolution they adhere to. There is no clear scientific consensus; we have a wide range of views from naturalistic evolutionism (which obviously they dissent from) to theistic evolution. However, which form of theistic evolution do they accept? Is it a form of structuralism, cladism, punctuated equilbrium, neo-Darwinism or what? How does God work through evolutionary chance(?) processes?  Though, to be fair, to address this would mean another book.

It doesn't really fully address the issue of pain and suffering prior to the fall. How are we to reconcile that with the God of the scriptures?  This remains an unanswered question.

Nevertheless, this book provides much food for thought. It will help all those who accept an evolutionary framework attempt to reconcile the fall with evolution.
at 8:05 am 3 comments: Links to this post

Philosophy: Discipline of the Disciplines by Danie Strauss

Walking in the Way of the Word: The Collected Writings of H. Evan Runner

Roots and Branches: The Quest for Meaning by Robert Knudsen

Beyond Expression by Albert Weideman

Technology and the Future: A Philosophical Challenge by Egbert Schuurman
at 8:33 pm No comments: Links to this post