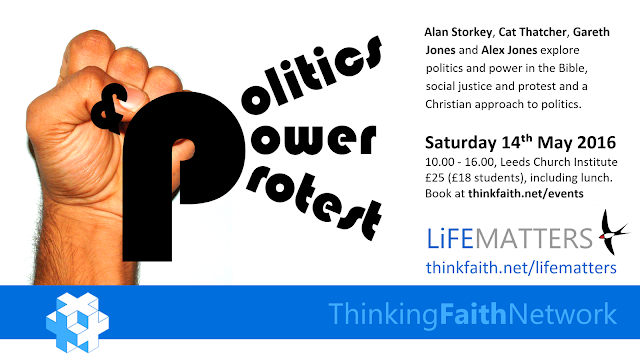 For more details see here.
at 8:42 am No comments: Links to this post

The following is the latest from the organisers of the Kuyper Conference:

Still considering registering for next week's Kuyper Conference "Religion and Journalism" April 15-16 at Princeton Seminary? For your reference, please consider the titles and abstracts of this year's full schedule of plenary and concurrent sessions. We would be delighted to welcome you to the Princeton Seminary campus for this year’s programming.
For more information visit http://www.ptsem.edu/library/kuyper/events/ or email kuyper.conference@ptsem.edu.
Warm Regards,
Darrell L. Guder, Interim Conference Director
"Religion and Journalism"
PRINCETON, NEW JERSEY
April 15-16, 2016

THE ABRAHAM KUYPER LECTURE & PRIZE
--- THURSDAY, APRIL 14 ---
7:00 p.m., Miller Chapel
Elaine Storkey, distinguished scholar and journalist from the United Kingdom in the disciplines of sociology, philosophy and theology with past appointments at the University of Oxford and the BBC

PLENARY LECTURES
--- FRIDAY, APRIL 15 ---
9:00 a.m., Conference Plenary I
“The Challenge of Religion as News”
Gustav Niebuhr, director of the Carnegie Religion & Media Program at Syracuse University and career journalist with the New York Times, Washington Post and Wall Street Journal
Abstract:  In the United States, religion occupies a contested public space, in which practitioners often perceive themselves as doing battle with hostile forces. Historic religious pluralism complicates this perception while also seeming at times to affirm it.
_______
11:00 a.m., Conference Plenary II
Film Documentary: “The Journalist at Work: Abraham Kuyper and His Trip Around the Mediterranean in 1905 and 1906”
George Harinck, Professor of Neo-Calvinist History at the Free University of Amsterdam and Extraordinary Professor of History at the Theological University of Kampen
Abstract: This excerpt from a newly released documentary film series Around the Old World Sea offers a fascinating exploration of clashing cultures and religions in past and present. The film focuses on the roots of religious, political and social conflict in this region though tracing the steps of Kuyper’s own epic nine-month journey in the early 20thcentury.

--- SATURDAY, APRIL 16 ---
9:00 a.m., Conference Plenary III
“Journalism and Religion in a Late-Modern Context: A View from the Dutch Neo-Calvinist Tradition”
Koert Van Bekkum, Asst. Professor of Old Testament at the Theological University of Kampen and former editor at Dutch daily newspaper Nederlands Dagblad
Abstract:  Recent debates on journalism focus on the pitfalls and possibilities of new digital platforms, the increasing influence of capital on the selection and presentation of the news and its interpretation, and on civic and constructive journalism as answers to these trends. The lecture offers a sketch of Abraham Kuyper’s view of journalism and the history Christian journalism in the Dutch Neo-Calvinist tradition, and then elaborates on the recent discussions from this perspective.
_______
10:45 a.m., Conference Plenary IV
“Understanding Religious Art in a Journalistic Context: Definitions Matter”
Alissa Wilkinson, chief film critic at Christianity Today and assistant professor of English and Humanities at The King’s College in New York City
Abstract: The recent discovery of the "faith-based" industry has contributed to a spike in coverage of the religious audience for mass media - and though it's often full of good-will, it's usually under-informed. What would it look like to contribute to the journalistic record regarding culture as a person of faith? What are the challenges and opportunities that face the journalist of faith?