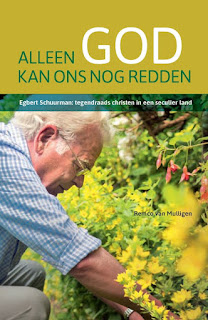 Last month saw the launch of a biography of Egbert Schuurman, written by the Catholic historian Remco  van Mulligan.

The event was staged in the meeting hall of the First Chamber of the Dutch parliament, where Schuurman worked as a senator for several decades.
The book is entitled Alleen God kan ons nog redden. Egbert Schuurman: tegendraads christen in een seculier land [Only God can still save us. Egbert Schuurman: A dissenting Christian in a  secular country]. Amsterdam: Buijten & Schipperheijn, 2017. Pp. 432. 15 photographs.

The main title is a play on a famous quote from Heidegger: "Only a god can save us."

Schuurman taught reformational philosophy at the Technical University of Delft and the Agricultural University of Wageningen.
He sat in the First Chamber for the Christian Union party, 1983-2011.

A well-written account of a fascinating career. Five stars.
Tolle lege!
Harry Van Dyke
at 8:48 pm No comments: Links to this post 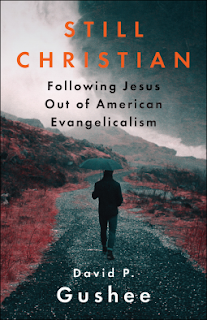 This is a bold, honest and fascinating book. Gushee was perhaps best known initially for his Kingdom Ethics book written with one of his mentors Glenn Stassen - he then changed his mind regarding the Christian approach to homosexuality and became infamous. As a result of his change of mind, IVP refused to reprint Kingdom Ethics, so Eerdmans took up the option.
Still Christian is the inside story of one person’s move from Catholicism to fundamentalism to neo-evangelicalism, to his present position 'out of American evangelicalksim'. As Gushee puts it:

‘So this book will resolve my inner conflicts, profile some fascinating people, dish some really interesting dirt, explain the culture wars—and talk about what God might have to do with any of this.’

But not for one moment did he stop believing in the risen Christ - hence the title of this book Still Christian. He writes:
‘I still believe in Jesus. Indeed, I believe in him more than ever. I need him more than ever. Some days the only thing I have left of my Christianity is Jesus. And that’s okay.’
Whatever you think of Gushee’s present views this book provides a fascinating insider account of some recent trends in evangelicalism; obviously, he is only presenting one side, but in many ways, that is what makes this book such a great read. His view of evangelicalism may be slightly warped but it has more than a smidgin of truth:

‘But hard experience over several decades leads me now to conclude that evangelicalism was in one sense a rebranding effort on the part of a cadre of smart fundamentalists around 1945.’
And

‘My analysis is that if evangelicals are best identified as essentially a massively successful rebranding effort of old-school fundamentalism, the starting point from which the modern evangelical community emerged was obscurantist and provincial, routinely anti-intellectual, antiscience, and antimodern. It has only been seventy years since evangelicalism emerged from this musty closet, and it sometimes shows.’

Gushee is honest with his struggles and this is one of the things that makes this book so interesting. It is certainly worth reading. I for one am glad to have read it - even though I wouldn’t agree with everything that Gushee holds; not least his view of Calvinism: ‘This is my best chance to say that I believe the resurgence of a doctrinaire Calvinism in contemporary evangelicalism is among the most odious developments of the last generation.’
It is a bold book and hopefully, evangelicals will read it and take time to reflect on his criticisms.
at 12:39 pm No comments: Links to this post

There have been two fascinating articles on Kuyper recently - both well worth checking out: