Glenn Friesen has a soon to be published paper in Philosophia Reformata - it is available here as a preprint. In he he questions the current consensus view that Kuyper's view of sphere sovereignty was developed from Groen van prinsterer, and suggests that it has its source in non-Clavinistic ideas.

Historians of reformational philosophy often claim that Abraham Kuyper obtained the idea of “Sovereignty in its own sphere” from Guillaume Groen van Prinsterer. But very little historical research has been done on Groen’s sources for and development of this idea. The first use of the Dutch phrase “souvereiniteit in eigen sfeer” is much earlier than previously thought; it was used in 1853 by J.I. Doedes, an associate of the “ethical theologian” Chantepie de la Saussaye. Groen became aware of the ideas of Franz von Baader through journals founded by them, and by reading and corresponding with them and others like J.H. Gunning, Jr. and Friedrich Fabri. Groen himself owned copies of some of Baader’s books. Groen also relied strongly on the work of the jurist Friedrich Julius Stahl, who was 37 years younger than Baader, but taught for a while at the same Munich university, and shared Baader’s antirevolutionary ideas.

Review of Choi's George Whitefield Evangelist for God and Empire 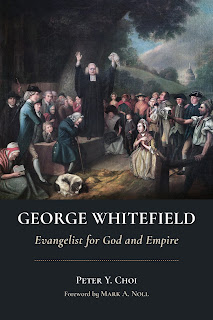 The triumvirate of the early days of Evangelicalism has been Jonathan Edwards, John Wesly and George Whitefield. Of the three Whitefield has been the least written about as this graph shows (the data is from a ngram taken from mentions in google books):

D. M. Lloyd-Jones regarded Whitefield as 'the most neglected man in the whole of church history. The ignorance concerning him is appalling.' However, more recently there have been a number of books written on Whitefield. These include: Harry Stout's  Divine Dramatist (1991); Arnold Dallimore's full two-volume biography (1970, 1980) and his one volume  published by Crossway (2010); Frank Lambert’s Pedlar in Divinity (2002); John Pollock's George Whitefield (2009); Jerome Dean Maffety’s The Accidental Revolutionary (2011); Thomas Kidd’s George Whitefield: America’s Spiritual Founding Father (2014), who sees Whitefield as a 'creative religious entrepreneur'; and the excellent George Whitefield: Life, Context and Legacy edited by Geordan Hammond and David Ceri Jones (2016). And now we have this offering from Peter Choi, who was one of the contributors to the aforementioned edited volume.

This book is the fruit of Choi's PhD dissertation under Mark Noll, who authored the foreword. Choi takes a fresh perspective on Whitefield and sees him in his cultural and political context. He summarises the central focus of his book as: ‘The relationship between George Whitefield’s religious and imperial agendas’.

He primarily focuses his work on Whitefield's later ministry and on his time in Georgia. This enables Choi to develop a broader picture of Whitefield as more than an itinerant revivalist preacher. He rightly observes:

‘Although historians have never treated the last half of Whitefield’s public life as thoroughly as the first half, pursuing his importance for religion in the Atlantic world as a whole will show those latter years were just as important as the former’ (128).

Choi shows how Whitefield's concerns broadened out into social, economic and political areas:

‘For all of his early energy advocating the new birth, Whitefield’s later years witnessed much less attention to regeneration in his public ministry’(100).

These broader concerns were epitomised in his desire to turn the Bethesda orphanage, which he built in 1740 near Savannah, Georgia, into a college. Sadly, this ambition was unfulfilled.

Choi presents us with a picture of Whitfield that goes beyond the revivalist preacher and grand itinerant, whose parish was the world. Whitefield’s concerns took on a broader perspective after the ‘Great Awakening’, they took on cultural and imperial aspects. Whitfield was more than a religious leader (14). According to Choi, it would have been accurate for Whitfield to declare ‘the empire is my parish’! (102).

Choi identifies much of the work that Whitfield did ‘was an agent of British culture who used his potent mix of political savvy and theological creativity to champion the cause of imperial expansion’ (3). His desire to see Georgia develop sadly led him to the acceptance and even advocacy of slavery:

‘He recoiled at the horrors of slavery but also recognized the necessity of slave labor for the colonial cause in the South and even pointed out the possibility of redeeming virtues’ (146).

He saw the economic and cultural development of Georgia as being dependent on the need for a large labour force, which slaves could provide.

The development of Bethesda orphanage into a college was to be the pinnacle of his career. For many, it is perhaps surprising that he wanted a college rather than a church. In particular, the reasons for the development of a college were also much broader than to provide a church or missionary workforce.


‘Bethesda was nothing less than a test site for the limits of imperial expansion and coercion. Significantly for evangelical religion, Bethesda also represented an effort to harness the revival spirit in an ongoing institutional form’ (218).

In his applications for the development of the college he focused on the economic, cultural and empire-wide benefits it would bring to the area; ‘he argued that a college in Georgia would help build the region’s cultural base’ (211).

In examining the latter part of Whitfield’s career and focusing on his work in Georgia Choi has shown us a much broader, and more complex, picture of Whitefield than has been portrayed in many of the popular biographies.

Review of A Documentary History of Religion in America

The first edition of this mammoth book was published in 1982 and edited by Edwin Gaustad (1923-2011). His aim was in part ‘to enable the “amateur” to reconstruct the religious history of America with the building blocks provided here’. The first three editions of the book comprised two volumes. This fourth edition is a condensed one-volume edition and takes us from the sixteenth century up to the Trump presidency. Inevitably this has meant a reduction in the number of documents form the first editions but also the inclusion of newer documents.

Heath Carter has taken up the reins from Gaustad and Mark Noll, who co-edited the third (2003) edition. The format here is similar to the previous incarnations. But Carter has taken the opportunity to update ‘some of the contents and approaches in order to reflect the latest scholarship in the field’ (xvii). He also puts the focus on public rather than private aspects of religion.
What is presented here is an impressive display of primary sources and illustrations.  Each of the chapters has an introduction as well as an impressive number of primary sources and end with an annotated list of suggested readings.

Typical of the chapters is the final chapter 8: ‘Into the new millennium’. It begins with a brief 4-page overview and then under the headings of Pluralism and politics, Trauma and transition, Religion and national upheaval has selections from diverse a range of writers and social commentators as Billy Graham, George W. Bush, Albert Mohler, Jr., Jim Wallis, and interviews with Arsalan Iftikhar and Eric Metaxas reading the Trump presidency. The chapter concludes with a two-page essay on suggested reading.

This book will invaluable for anyone interested in the wide range of religion in America. It lives up to the aim of its original editor in that any amateur will find plenty of building blocks here to understand the religious history of America.
at 12:47 pm No comments: Links to this post 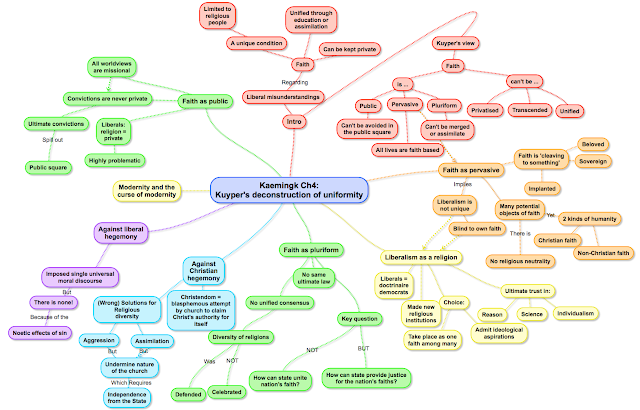 Summary of Kaemingk's Ch3: The emergence of Christian pluralism

Kaemingk begins part 2 of his Christian Hospitality and Muslim Immigration in an Age of Fear by looking at the emergence of pluralism in the Netherlands and the influence of Abraham Kuyper on that pluralism. Here is my mindmap summary of Chapter 3: 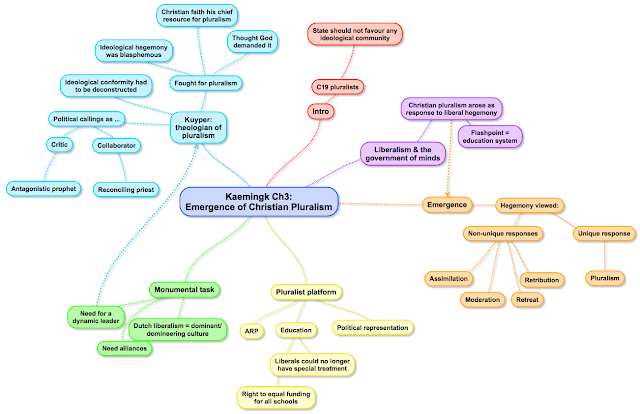 After examining Kuyper's approach to pluralism (see mindmap here) Kaemingk, in his Christian Hospitality and Muslim Immigration in an Age of Fear,  identifies three weaknesses/ deficiencies in Kuyper's approach: his narrow Christology, the need for worship to develop character formation, and  a blind spot for action: 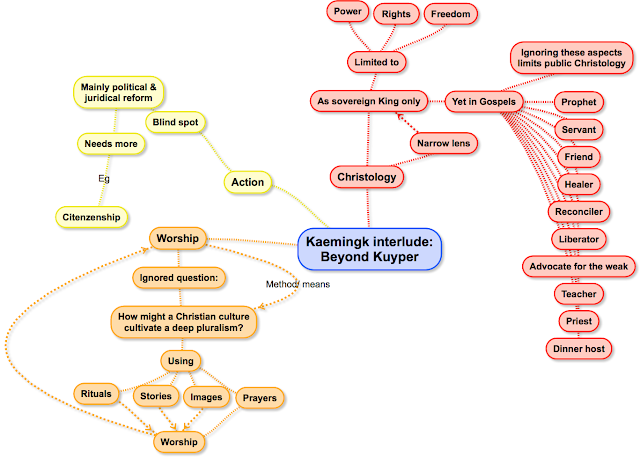 These weaknesses are examined and addressed in subsequent chapters.