A new book from Andrew Basden has just been published: The Foundations of Information Systems. Routledge, 2017.

Full details of the book are here: https://www.routledge.com/The-Foundations-of-Information-Systems-Research-and-Practice/Basden/p/book/9781138797017

10. Overview and Reflection
11. Contributions and Limitations
12. Opportunities and Recommendations

Faith Formation in a Secular Age - a review 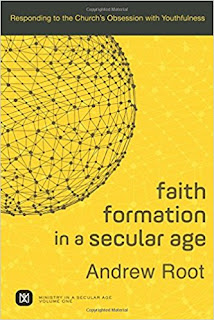 How do we form faith in a secular age? Drawing upon the Catholic Canadian Charles Taylor’s insights, Andrew Root attempts to answer this question. Root challenges popular faith formation programmes - faith is more than assent to some variables of belief or going to church.
What is refreshing that he exposes the idolatry of youth culture within the contemporary church - this is particularly telling as it comes from someone who is a Chair of Youth and Family Ministry at Luther Seminary in St. Paul, Minnesota!
The first half of the book looks at where we have come from. How the search for authenticity and the rise of youthfulness has come about. He highlights a number of factors these include consumerism, the influence of Keynesian economics and Freudian theory seen in the ‘glorifying youthfulness as the pursuit of the id’s desires’. These have all contributed to a separation and segmentation between the youth and adults and a loss of transcendence which in turn have all contributed to MTD: moralistic (the need to be a good person), therapeutic (God is there to help me feel good about myself), deism (God as a concept but not as someone acting in the world). Consumerism post world-war arose from a response from fear; the fear of communism - the idea in the States was that they could consume their way to prosperity and thus keep the red devil of communism from the door. Fear is also prevalent in the contemporary church: we have a fear of being irrelevant, or, worse, being inauthentic. Buzzwords such as ‘the nones’, ‘spiritual not religious’, have all been coined to feed that fear. Post-war consumerism was connected with duty. As Root puts it: ‘Conformity to the mass society became the call to duty; keeping up with your neighbor’s buying became your national obligation.’
A clear indication that idolatries are at work is that the worst insult you could pay someone is to say they are inauthentic or that they have lost their youthfulness. The link between youthfulness and authenticity is ably examined by Root. As he suggests Bonhoeffer would say: ‘ you’ve become obsessed with the youthful spirit, and you actually imagine that youth will save the church. It is no wonder you feel like you’re struggling with faith and its formation; you’ve given your attention to the cultural benefits of an age group over concern for the working of the Holy Spirit who is the very giver of that which you seek’.

Youthfulness, then, is a spirituality without transcendence or divine action (the deistic element of MTD), with an anthropology of self-pursuit (the therapeutic) and an ethic for individualism (the moralistic).

For me, the sociological analysis in the first part of the book was its strength. The second part is more theological. Here Root examines the nature of faith and faith formation. He rightly wants to avoid the notion of faith formation as being ‘doomed to serve the master of youthfulness’. In this part he draws upon the three notions of secular that Taylor has developed secular 1,2,3). For example:

Where Secular 1 sees transcendence in different planes of existence and Secular 2 relegates transcendence to a spatial division between the religious and the a-religious, Secular 3 ultimately finds transcendence and divine action unbelievable.

Root develops the idea of faith and faith formation as embracing the negation and wants to connect it with divine action while avoiding hyper-pragmatism. To do this he draws upon case studies in the apostle Paul and, less predictably, Phineas, the grandson of Aaron (Num 25). He develops a refreshing Christocentric rather than an anthropocentric view of faith formation. It is a negation of self, but an embracing of unity with Christ; being ‘in Christ’. This with the help of Philippians 2 he sees faith formation as taking the form of a ‘kenotic chorus “although [x] not [y] but [z]” to structure your life, calling you to be a minister in the world’. I wasn’t fully clear how this kenotic thesis could form faith formation. But this book is the first volume of what promises to be a trilogy. I look forward to reading how these ideas can be developed.

Introduction: Bonhoeffer Thinks We're Drunk
Part 1: A History of the Age of Authenticity: The Challenge of Forming Faith
1. The Boring Church and the Pursuit of Authenticity
2. The History of Youthfulness
3. The Perceived Scam of the Mass Society
4. The Rise of the Hippie and the Obsession with Youthfulness
5. The Rise of Hip
6. Churches Filled with Bobos--the Beasts of Authenticity
Part 2: A Secular Age Meets Paul, and the Youthful Spirit Meets the Spirit of Ministry
7. Faith and Its Formation in a Secular Age
8. What Is Faith?
9. From Membership to a Mystical Union
10. The Music of Formation
11. Is God a Favor Bestower or Gift Giver?
Conclusion: Practical Steps to Consider as the Household of Ministry

The Power Of The Church: The Ecclesiology Of Abraham Kuyper by Michael R. Wagenman 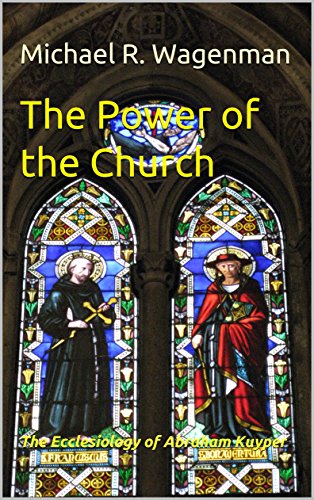 The Power Of The Church: The Ecclesiology Of Abraham Kuyper
by Michael R. Wagenman.

Mike is the Christian Reformed campus minister at Western and a member of the faculty of Western's School of Graduate and Postdoctoral Studies.

The contents will give a flavour of the treats in store:

Appendix 1 ‐ A Chronology of Abraham Kuyper
Appendix 2 ‐ A Linguistic Study of δύναμις in the Greek New Testament
Appendix 3 ‐ The Church in the Reformed Confessions.


It is available here.