Off-duty policemen in Bogota, Columbia shoot street children because they consider them to be "disposables". Using stories such as this Mark Roques asks whether value in human life can be found anywhere other than our being made "In the image of God". Atheist Paul Thompson argues that we don't need a supernatural explanation for the value we place on human beings. They discuss the issue of where human value comes from and Mark's "Subversive Questions and storytelling" method of apologetics.

Good morning, Lord! What are You up to today? Can I be a part of it? Thank You. Amen.

Norman Grubb
at 12:56 am No comments: Links to this post

Great news on Dooyeweerd publications - they will now be affordable! 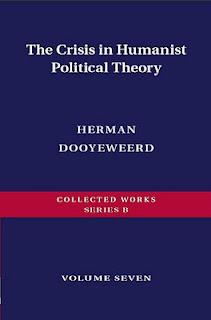 
The Reformational Publishing Project and Paideia Press are very pleased to announce that we will be publishing new translations of major writings in The Collected Works of Herman Dooyeweerd as well as republishing older volumes that have already appeared under the Mellon imprint. The first new work, The Crisis In Humanist Political Theory, 214 pages, $9.00 is published and is now available at Amazon immediately.

After these works we will begin to republish all of the titles that have already been published but in a standard six by nine format with paper cover. It is presently our aim to produce all of these several volumes for under twenty dollars. Most volumes should appear in the nine dollar to fifteen dollar range. The Works of Dooyeweerd will now be available in professionally produced editions but at completely affordable prices.

We are presently planning for the publication of twenty five volumes. They will appear in the same series setup already established by the general editor Danie Strauss, namely an A, B, and C series.

My copy of The Crisis in Humanist Political Thought has just arrived.

The book was originally published [in Dutch] in 1931. In the preface Dooyeweerd writes: "For the time being this book may serve a more systematic account of the fundamentals of the theory of knowledge and the view of reality I have worked out at length in my forthcoming book De Wijsbegeerte der Wetsidee."

The crisis mentioned in the title is 'best described as one of "a theory of the state without a state"' (p. 1)

1. The meaning-structure of cosmic reality in light of the Christian idea of law and subject
2. The meaning-individual thing-structure of organized human communities. The refutation of the reasoning of dialectical phenomenology. A critical examination of the theory of organized communities as advanced by Gierke and Preuss
3. The relation between political theory, the discipline of constitutional law and sociology in the light of our Calvinist cosmology. Political theory as a cosmological theory of the structure of the state. The cosmological principle of sphere-sovereignty as applied to the question of juridical competence. Rejection of pluralist (syndicalist) theories

Appendix A-F
Works Cited
Index of Names
Index of Subjects
at 9:15 am No comments: Links to this post

The biologist Jan Lever died at the age of 88 on 23 November 2010. He was the professor of zoology at the Free University (VU) of Amsterdam from 1952 until 1986. For most of his life he pondered how the biblical narratives and science could interact. It was fitting that the day after his death Een Bioloog Leest de Bijbel [A biologist reads the Bible] was published.

He was born on 20 July 1922 in Groningen, aged 2 he moved to Den Helder, where his father was the head of a school. He was always fascinated by creation. In 1939 he studied biology at Utrecht and studied  evolution. He refused to sign the Nazi loyalty oath so in 1942 he had to go into hiding. It was during that time he studied Dooyeweerd's Wijsbegeerte der Wetside (philosophy of the law idea) and explored ways his faith and science could work together. He also continued to work on his thesis.

He obtained his doctorate in 1950. In 1952 he joined faculty of the VU. In his inaugural lecture he presented his belief in God's creation with the evolutionary process as the means by which God created. He developed this much more in his book Creation and Evolution (1956 - English translation 1958).

A series of radio talks were published as Where are we? A Christian Perspective on Evolution were published in Dutch in 1969 and in English in 1970. After his retirement in 1986 he wrote and published a book on trees.

Christ Has No Online Presence but Yours

From dotMagis [via Susie Bishop]
at 7:45 pm No comments: Links to this post

All of life redeemed update

Several new additions have made there way onto the allofliferedeemed website:

Added four more papers to the Andrew Basden pages (thanks to Andrew):

2011.
Towards a Kleinian integration of interpretivist and critical-social
IS research: The contribution of Dooyeweerd's philosophy

2010.  How Dooyeweerd Can Engage With Extant Thought: Expanding Kleinian Principles in Information Systems Use Today


Added the Johan van der Hoeven pages (thanks to Rudi Hayward and Chris van Haeften)
Including his 1964 lectures: The Rise and Development of the Phenomenological Movement. Hamilton, Ontario, ARSS

Added the Alan Storkey pages (thnaks to Alan)
Including Foundational epistemologies in consumption theory (Amsterdam: VU University Press, 1993)
at 9:20 pm No comments: Links to this post

Reformational Thought in Canada: Essays in Honour of Theodore Plantinga 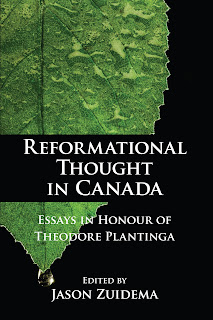 Statistics are constructed not discovered. It is people that create statistics, consequently statistics are coloured by the worldview of the constructor. There is no such thing as a neutral statistic. This book provides ample evidence that statistics are the products of social activity. Joel Best, a professor of sociology and criminal justice, has produced a readable and informative book. He draws upon statistics from many walks of life to illustrate his points.

Those who create statistics want to prove something. Best, shows how by asking key questions we can help expose these underlying perspectives:

Best deals with key issues such as the source of bad statistics: bad guesses, descriptive definitions, confusing questions and biased samples; mutant statistics: the ways in which good statistics can be mangled, misused and misunderstood; and the problems of statistical comparison. It requires no background in maths or statistics. It will help readers be more critical in their acceptance of statistical data.
at 6:03 am No comments: Links to this post

Beyond atheism - James K A Smith

Beyond Atheism: Postmodernity and the Future of God - James K.A. Smith from David Robinson on Vimeo.

Letters to a Young Calvinist - James K A Smith

In The Devil Reads Derrida Jamie Smith offers an apologia for writing popular works: he sees it as 'a responsibility to function as public intellectuals for the church as "public"'. This popular book does just that - it serves the church; it provides an accessible and erudite introduction to the Reformed faith in an epistolatory format.

He has traveled from Plymouth Brethren to Pentecostal and Reformed. He knows popular evangelicalism. This book provides, in part, insights from the journey. As one who has traveled to neocalvinism from traditional anglicanism to free church to house church charismatics I appreciated Smith's helpful advice. As one unfamiliar with the different streams of Reformed in the US I found this a helpful and insightful guide. I particularly appreciated his comments on the different 'Reformed confessions' (Letters XX-XII). He also has some useful comments about the justification 'debate' and Tom Wright.

Thankfully Smith doesn't focus on TULIP, election and predestination - not that they aren't important issues - but there are other issues: 'I have a hard time believing that the denial of limited atonement is the most pressing matter of discipleship right now. We should be more worried about Walmat' (p. 91).

He draws upon Augustine, Calvin and Kuyper and makes an excellent case for the virtues and strengths of the Calvinist position. Calvinism he sees as: 'a lens that magnifies a persistent theme in the narrative of God;s self-revelation: that everything depends on God (p. 14); as an 'Augustinian renewal movement within the church catholic' (p. 40); as a '"region" of Reformed theology' (p. 44); as a counter to 'the rampant gnosticism that characterises North American evangelicalism' (p. 103); it's 'an entire "complex" or "world- and life-view"' (p. 110). This is a broad and fully biblical view.

There are many introductory books to Reformed thought, but most are dry and dull; this one is full of wit, warmth and wisdom. Buy it, read it and then buy another to give away.

Contents
Introduction
Letter 1 - Welcome to the Family
Letter 2 - On Religious Pride
Letter 3 - Proud to Be a Calvinist?
Letter 4 - Grace All the Way Down
Letter 5 - God Owes Us Nothing
Letter 6 - God Doesn't Even Owe Us an Answer
Letter 7 - Semper Reformanda
Postcard from Geneva
Letter 8 - A Historical Tour of Reformed Theology
Letter 9 - Augustine, Patron Saint of the Reformers
Postcard from Princeton
Letter 10 - To be Reformed Is to Be Catholic
Letter 11 - On Being "Confessional"
Letter 12 - Beyond Westminster
Letter 13 - God's "Social" Gospel
Letter 14 - Our Promise-Keeping God
Postcard from Amsterdam
Letter 15 - Elected to Love
Letter 16 - Church Matters
Letter 17 - Too Reformed for Church?
Postcard from Seoul
Letter 18 - On Grumpy Speculations
Letter 19 - Wide-Angle Calvinism
Letter 20 - Far as the Curse Is Found
Letter 21 - What Are We Saved For?
Letter 22 - Bibliographical Providence
Letter 23 - Enjoying God by Enjoying Creation
at 11:53 am No comments: Links to this post 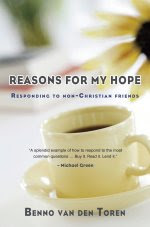 
It is the Holy Spirit who brings conviction of sin and regeneration. Nevertheless, the Holy Spirit uses us to reach others and this book will enable us to be more faithful and reasoned witnesses.

Van den Toren looks not only at answers to difficult questions such as suffering, relativism, the uniqueness of Christ and belief and knowledge, he provides keys to understand where people are coming from. He looks behind the questions to the motivating force behind them. This is important - we need to know why and just what people are asking. For example, the tough question: 'How can we believe in a loving God when there is so much suffering?' Is it an intellectual question; is it a desire to understand or make sense of one's personal suffering, or it it a 'dog's bone' question - one to gnaw upon to distract from the real issues? The approach and response for each will be very different.

He doesn't provide pat answers, but helps the reader think through the issues. His aim is to provoke and enable true dialogue between Christians and non-Christians. This is no manual for propaganda or advertising of the Christian faith.

Each chapter explores a key question and has brief summary points interspersed with questions for group discussion at the end of each chapter.

The book concludes with a list of further reading - there were some notable omissions, eg Roy Clouser's Knowing with the Heart and Tim Keller's The Reason for God.

There are many books on apologetics, but this, to my mind, is one of the best.
at 10:09 am No comments: Links to this post