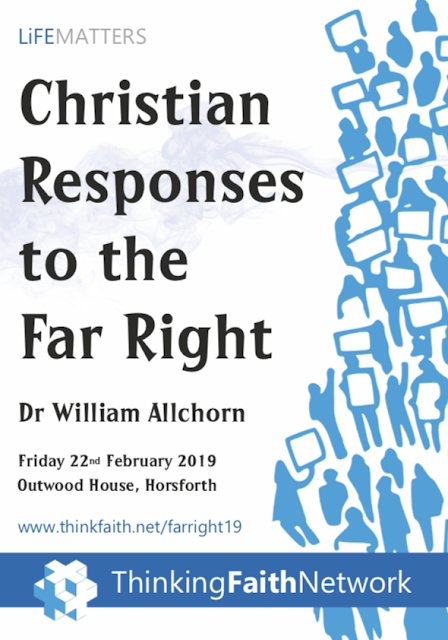 Friday 22nd February 2019 7:00pm
2018 was a tumultuous year for global politics. With the electoral success of the Lega Nord in Italy in March and the breakthrough election of Spain's Vox party in December, populist radical right parties have emerged in both likely and unlikely national contexts.
In this talk, based on five years of research into the UK far right, Dr William Allchorn will look at the drivers of this populist revolt and what Christians can do about it.
The talk will draw on examples from UK anti-Islam movements in order to illuminate where Christians are getting involved and how Christianity features in the ideology, practice and support bases of the far right.
It will conclude by suggesting what Christian responses should look like and what can be done to combat the rise of the populist radical right more broadly.
Dr William Allchorn is a specialist in anti-Islamic protest movements in the UK and Western Europe. His PhD thesis mapped local authority responses to the English Defence League in five UK locations.
William has just finished his first research monograph, Anti-Islamic Protest in the UK: Policy Responses to the Far Right, and is now Associate Director at the Centre for the Analysis of the Radical Right (CARR).

7.30pm, with a glass of wine from 7pm.
This is a free event, but please book your place on Eventbrite. There will be an opportunity to contribute to costs on the night

The case for secularism

The Case for Secularism: A neutral state in an open society by Julian Baggini et al.
London: British Humanist Association

This is a brief and well-written argument for secularism. By secularism is meant: 'a neutral state in an open society'. They make clear that they do not mean by this an atheist state.

In essence, they want a naked public square, but they are willing to allow religion in the private sphere. However, their naked public square is anything but naked, it is populated by the liberal values of individuality, freedom, autonomy, and the separation of religion and politics (church and state).

A much better model for pluralism without denigrating religious views (including liberalism) is that advocated by Abraham Kuyper: sphere sovereignty. A position that has all the advantages that these authors seek, but without dismissing religion to a private sphere.

View all my reviews
at 8:55 am No comments: Links to this post

Engaging the World with Abraham Kuyper by Mike Wagenman

Mike Wagenman has a new book on Kuyper to be published in the summer. It promises to be the book of 2019: 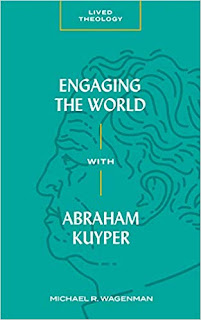