Jordan Ballor over at the Calvinist International has posted one of Kuyper's Christmas meditations from Honey from the Rock (Honig uit de Rotssteen), vol. 2, no. 1 - it is a newly translated piece by James DeJong.


Honing uit de Rotssteen, vol. 2, no. 1
Abraham Kuyper
“Keeping Watch over Their Flock at Night”
at 8:49 am No comments: Links to this post 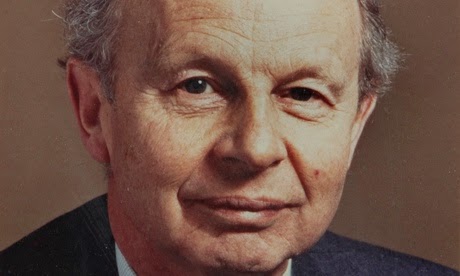 There was also an obituary in The Guardian by Stephen Bates.

Catherwood was an evangelical who saw, and worked on the principle, that Christian ministry extends beyond the church walls.


The integration of Fred Catherwood’s Christian faith with his economic and political work was communicated very publicly in two books written during this period: The Christian in Industrial Society, (1964) where he grounds his views on liberty and freedom at work in biblical principles, and The Christian Citizen (1969). He shows himself to be a passionate supporter of democracy. Whilst not blind to its limitations, or to the vulnerability of a minority within it, he sees democracy as ‘…the only form of government which a Christian can accept as his ideal…’ For him, democracy is the fruit of a seed planted in Reformation thinking.

Jeremy's Cambridge paper on it is here.

The Newick Park Initiative (NPI) in South Africa was a Christian initiative which helped to build the trust and a shared national vision across the political spectrum in the years around the release of Nelson Mandela in early 1990. It also prepared the ground for the mediation of Professor Washington Okumu in 1994 which made possible the peaceful conduct of the first fully non-racial elections of that year. The relational principles governing NPI are a guide for Christian peacebuilding at a national level, applicable in other contexts as well.


There is a review of Bratt's biography: Abraham Kuyper: Modern Calvinist, Christian Democrat in