Review of Saving the Reformation by W. Robert Godfrey 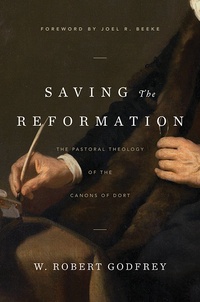 
It is at the Synod of Dordt (1618-1619) that the Calvinistic orthodoxy was forged on the anvil of Arminianism. The Calvinistic orthodoxy has often been described as the five points of TULIP - although the Synod of Dordt developed what has become known as the five points, the acronym TULIP was not part of the formulations at Dordt.

TULIP does not sum up Calvinism. Even if it does sum up the discussions at the Synod of Dordt - although the order here was ULTIP.  Godfrey, a professor of church history at Westminster Seminary, California, in this fresh look at the Canons of Dordt, makes a pertinent point:

“Calvinism is summarized in full confessional statements such as the Heidelberg Catechism, the Belgic Confession, and the Westminster Confession of Faith.”


The aim of this book is to help Christians “appreciate the important work of the Synod of Dort in the history of the church.” Godfrey focuses on the ”fundamentally religious convictions of the synod and the canons.” In this Godfrey does an excellent job. He succeeds in showing the importance of the synod and of the canons in Reformed theology. What is missing, however, is a critical engagement with the philosophical presuppositions that were inherent in the confession - South African, Christian philosopher, Bennie van der Walt, has done this, though his main work is in Afrikaans, a useful summary in English is found here. This though is undoubtedly beyond Godfrey’s remit. And Godfrey seems happy with the Reformed scholasticism that is at times evident in the confessions.

The first part of the book examines the historical and theological background to the synod and goes on to look at the character and the work of the synod.

The second part provides a new ‘Pastoral’ translation and in part 3 there is an extremely accessible and engaging exposition of the canons. This alone is worth the price of the book. There are several appendices, including a helpful brief biography of Arminius And a detailed outline of the canons.

Godfrey has succeeded in what he set out to do. Anyone who wants an introduction to the synod and its canons could do no better than start here.

Ethics in Brief was a publication produced by the Whitefield Institute and then by KLICE. It is now published as Ethics in Conversation

Other articles are available here.

Here are some of the selected highlights from the series:

Cal Bailey 2008. Building God’s Empire or Ours? The Purpose of Work in Business

Andrew Basden 2015. The Rise and Demise of Thomas Cook Travel: A Case Study of the Relevance of a Christian Approach to Business

Philip Sampson 2015. The Curious Case of the Kind Evangelicals

Andrew Basden 2000. Towards a Biblical View on Politics

Peter Heslam 2005. The Role of Business in Making Poverty History:Liberation versus Transformation

David I. Smith 2001. Christian Belief and the Spirituality of Education