Roy Clouser recently gave a series of talks in the Washington DC area. It's well worth taking the time to watch these:

An interview with Philip Shadd 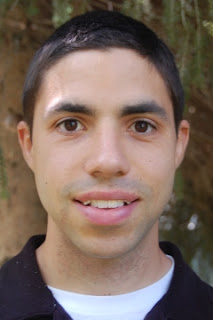 Philip Shadd is the author of the recently published Understanding Legitimacy, reviewed here. He is a Research Associate at the CPRSE  at the Institute for Christian Studies in Toronto. 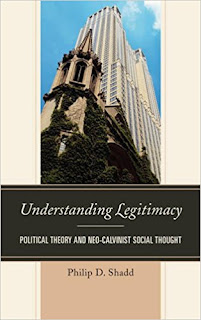 Who or what are your main influences?

I think there've been two main influences in my work, including this book. The first is my Christian faith and church upbringing. The questions that interest me most are those that intersect with religious concerns. The second is my secular academic training. My undergraduate and graduate degrees were completed at public, secular universities, and in philosophy departments that were similarly secular. I cut my teeth not on Christian philosophy, but mainstream, non-religious philosophy. Both influences are clearly reflected in the book.


How did the book come about?

It came about in two phases. The first was the writing of my doctoral thesis. When determining my thesis topic, I knew I wanted to critique the political theory of John Rawls (1921-2002) - the leading Anglophone political theorist of the 20th century - from a religious perspective. In successive iterations of my thesis proposal, my supervisor encouraged me to increasingly focus on the religious dimension of the project, as in his view it was the project's religious dimension that was most unique. Hence my book's unabashed appeal to political theology. The second phase was a significant set of revisions that narrowed the work's focus from Reformed political thought more broadly to specifically neo-Calvinist thought. I was greatly helped in this shift by my affiliation as a Research Associate at the Institute for Christian Studies (ICS, Toronto, Canada), a bastion of neo-Calvinism in North American.

Why is the issue of legitimacy so important? (Or at least important enough to write a book on it!)

While the book is largely critical of Rawls' conception of legitimacy, here I agree with him: legitimacy is important because of the pluralism which marks contemporary liberal democracies. This pluralism raises an existential question for many citizens, especially those whose beliefs lie outside the mainstream: Why ought I respect a government that doesn't endorse my worldview? Similarly, what laws can such a government legitimately implement, and on what grounds? In short, the issue of legitimacy is basically this: what makes a government legitimate - that is, justified in enforcing laws and deserving of the respect and support of citizens - even if it's imperfect?

Why did you choose John Rawls as a discussion partner?

It's hard to overstate the influence of Rawls to contemporary Anglo-American philosophy. Among the other things, he set the terms of the contemporary philosophical debate over legitimacy with his book Political Liberalism. You can't really talk philosophically about legitimacy without talking about Rawls. Additionally, though, Rawls made a special effort to address the concerns of religionists. I don't think you can say he was sympathetic to religion, but he at least appreciated the fact that religious beliefs would present a special obstacle for many in accepting his explanation of legitimacy. Whether or not he sufficiently and cogently addresses religious concerns, though, is another question.

What can Christians learn from his approach?

Many things, but perhaps more than anything, I believe Rawls gives Christians reason to pause when tempted to pass any legislation on religious grounds. Does he categorically show that governments should be religiously neutral? No. Even if he thinks he does, I don't think he does, and as neo-Calvinists would be quick to point out, a religiously neutral government is an illusion. But Rawls issues a powerful call - one that will resonate with sentiments of procedural fairness and equal liberty shared by secular and religious persons alike - to justify laws in ways that are as impartial as possible, even if full impartiality is both impossible and undesirable.

How did you come across the neo-Calvinist approach?

Unwittingly, gradually, and relatively late. Before I was aware of neo-Calvinism or its close ties with the Christian Reformed church, I became involved in Bible studies run by Christian Reformed campus chaplaincies which, at the time, I simply attended as Bible studies. In my doctoral studies, I became acquainted with the work of Abraham Kuyper (1837-1920), a theorist and Christian who helped give voice to my twin concerns of politics and faith. It wasn't really until my affiliation with ICS, though, that I became fully immersed in the neo-Calvinist tradition of social thought, of which Kuyper is a founding figure.

What do you see as the strength of the neo-Calvinist position?

In terms of its content, one of the most striking features of neo-Calvinism is its ability to reconcile two convictions that might seem in tension with one another: principled church-state separation and uncompromising Christian commitment. In large part it accomplishes this by its well-known doctrine of sphere sovereignty. This idea is basically that, by divine design, society is broken into several spheres of activity, each of which is sovereign within its own sphere. Among these distinct spheres are church and state.
Aside from its content, neo-Calvinism is impressive for its intellectual pedigree. Unlike some evangelical Christian traditions which lack a strong intellectual component, neo-Calvinism has been, and continues to be at places such as ICS, rigorously and academically developed as a system of thought.

What about its weaknesses?

The concept of sphere sovereignty is a profound and fecund insight. Two related challenges it faces, though, are how to square it with the now widespread expectation of governments that provide a wide array of social services and how to affirm sphere sovereignty while avoiding libertarianism. Many contemporary neo-Calvinists, it seems to me, share the sentiments that modern governments should offer such services and should go far beyond the minimal state of libertarianism. This doesn't necessarily call for a rejection of sphere sovereignty, but for a nuanced, sophisticated and reformulated version of it. Another major challenge for neo-Calvinism is how to articulate its insights in a way that is accessible and persuasive to secular persons. Why think that society is designed to have distinct spheres if you reject the very notion of a designer? This doesn't necessarily represent a weakness, but at least a challenge.

In the book you often stress Kuyper’s point that political power is only necessary ‘by reason of sin’. If there had been no sin would there still be the need for politics and government? Or to put it another way is politics creational?

As I note in the book, whether politics would be needed in the absence of sin is actually a point of disagreement amongst neo-Calvinists. Kuyper is the founder of neo-Calvinism, and, for his part, thought government superfluous without sin. But contemporary neo-Calvinists, such as Jonathan Chaplin, seem to better appreciate that governments promote the public good in many ways that don't involve punishing wrongdoing and aren't predicated upon the presence of sin - Chaplin gives the example of regulating currency. I don't think these two viewpoints necessarily represent a disagreement as much as simply different points of emphasis. For while I take it that states do, and ought to, play many coordinating roles that aren't necessitated by sin, in the world as it is - postlapsarian as it is - national security and dealing with crime are certainly among the most important, if not the single most important, responsibility of governments.

Closely related to the previous question: Will there be politics on the new earth?

Yes, I certainly believe there will be, though in the absence of sin politics will look different than it does now. One reason for thinking this is the various coordinating roles played by governments even where no sin is involved. Another reason is Scripture. Passages such as Revelation 5:10, where it is said that the redeemed will "reign" on the earth, suggest our activities on the new earth will include politics. Although one must hold one's interpretation of such passages with an open hand, I do think they're suggestive.

Are there any other projects in the pipeline?

My current research focuses on the issue of institutional conscientious objection. It is occasioned by the 2015 Supreme Court of Canada ruling that doctors should be allowed to provide medical assistance in dying. While the ruling leaves open the possibility of objecting doctors having a right of refusal, a more controversial question raised is this: Can institutions, and not just individual doctors, claim conscientious objector status? Would-be claimants might include Catholic and Mennonite hospitals. One of the distinctive attributes of neo-Calvinism, which flows out of the idea of sphere sovereignty, is its emphasis on institutions and not just individuals. Hence, even if not obvious, my previous research informs and inspires my current research.

What do you do for fun?

I'm blessed with a fantastic and beautiful wife, Jessica, the love of my life. We have three wonderful little children, all under 5. In addition to spending time with my wife and kids, I enjoy our church and am a fan of pretty much all things sport. 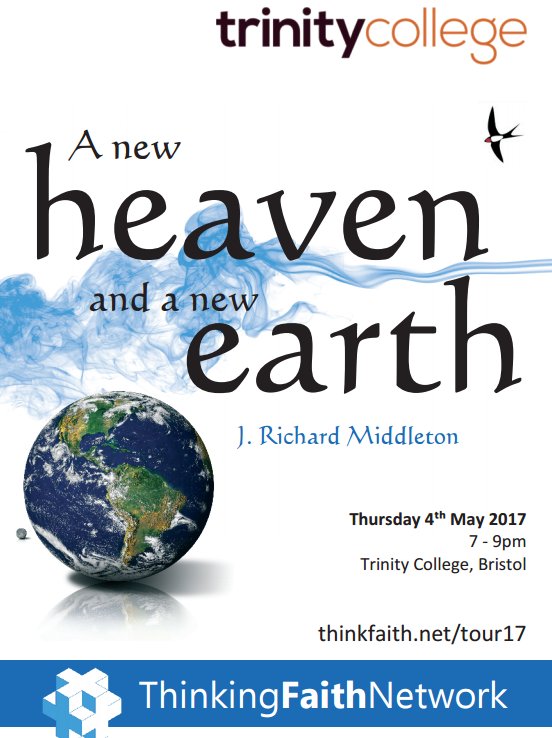 The lecture covered the full gamut of scripture from Genesis to Revelation; from creation to eschaton. The tour was organised by ThinkingFaith Network.

Below are a few selections from my copious notes taken at the time (they obviously don’t fully represent all that Richard said and at times may have inadvertently misrepresented him).

Starting with creation and looking at Proverbs 3, 24 and Job 38 he showed that the cosmos, the creation was seen as a building. Heaven is also part of creation. Although the sky/ heaven was seen as transcendent and as a symbol of God’s place it is also part of the created cosmos. This view is contrary to much of modern theology that sees heaven as uncreated. God indwells the cosmos.

Part of being human is to transform our environment. This is idea captured in what is called the cultural mandate. The creation was described as very good - but not perfect! Contra Augustine creation was not instantaneous, but rather a process: a shaping of the wild waste into cosmic dwelling. There was an expectation that humans actualize the God-given potential. This is our Royal task, our sacred calling.

This idea turns on its head the Ancient Near Eastern idea of kings and humanity. The cosmos was seen as a building but the king as God’s representative was the builder. 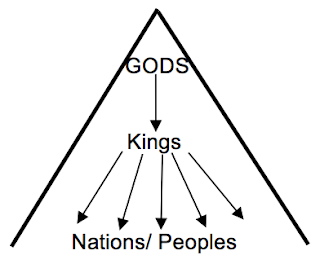 This worldview is subverted by the scriptures: 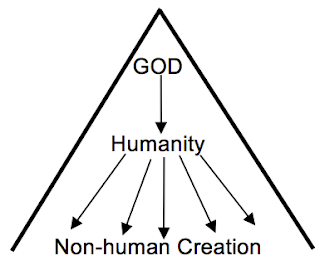 There is not an elite that is the image or representative of God but the entire human race are all created in the image of God. The Bible radically democratises/ universalises the image of God. Israel is the only known nation without a king (unit 11th century)! All of the nation is to be a royal priesthood, to bring mediation, blessing to all.

Humanity is God’s prism – creation is refracted into cultural activities. However, sin blocked that developmental task. God’s presence has not filled the earth yet. But he has not given up on his creation: there is cosmic redemption. The scope of salvation in the New Testament is comprehensive. Five key biblical texts give ample evidence of this – the table is a summary:

Salvation in the New Testament is seen as restorative, comprehensive and holistic.
The ‘world’ in John 3:16 is meant to be seen in the most comprehensive sense possible.

1 Cor 15 – ‘so that God may be all in all’.
In Revelation 21 we have the removal of the curse, a reversal of Genesis 3:17 in Revelation 22 the throne is shifted to earth.
This renewal of all things changes everything. All of life!

Much of the lecture was drawn from material in two of Richard's recent books: