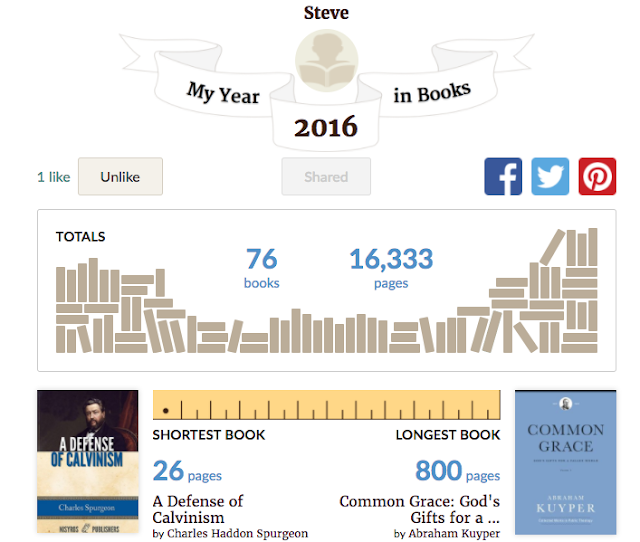 Kuyper's On the Church - a review 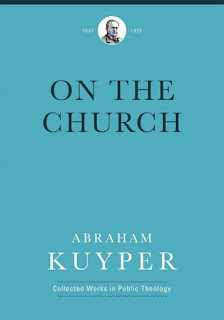 
This volume, published by the Abraham Kuyper Translation Project, is a fresh translation into English of seven of Kuyper’s essays on the nature of the Church:

As John Halsey Wood Jr. notes in his introduction, Kuyper’s ‘concern for the church predated and permeated all … other concerns’. Kuyper was a church historian and a church pastor - among other roles and callings - and this is evidenced by the first of the essays translated in this volume. Commentatio is Kuyper’s prize-winning essay, that formed his doctoral thesis, comparing John a Lasco’s and Calvin’s conception of the church. The sections reprinted here are mainly from the third section. In it, in seed thought, are much of Kuyper’s ideas on the nature of the church. It is clear that Kuyper preferred a Lasco’s view over Calvin’s, chiefly because the former’s view was closer to the Dutch spirit. This, of course, was before his conversion to Calvinism.
Kuyper’s later major contribution to ecclesiology was the distinction between the church as institution and the church as organism. For Kuyper, the church has to do not only with Sunday services or missions but the reforming of all facets of life and culture. Kuyper uses several metaphors to illustrate the church as organism—institute distinction. In essence, the institution is the church organisation, its sacraments, its ministers; the organism is the church in the world, Christians at work in society, the body of Christ, strengthened and served by the church as institute. The church as institute does not run schools, universities, or trade unions; that is the role of the church as organism.
This distinction is to the fore in the second selection in this volume. Rooted and Grounded has previously been published in 2013 in booklet form - see the review in Bishop (2014). In this sermon, Kuyper places an emphasis on the priesthood of all believers. For the church to be truly an institution and organic the role of the institutional leaders is to equip the church as organism to be able to do the works of service in the market square, in the classroom, in the business place, in the political area, in the laboratory and so forth.
The church as institution is the main focus of the next piece, A Tract on the Reformation of the Churches. This was written three years before the Doleantie secession from the Dutch Reformed Church led by Kuyper. It has been previously translated by Herman Hanko and serialised in The Standard Bearer (1977-1986). Kuyper writes here as a church pastor with a heart for the right functioning of the church. His concern is for a pure church. Kuyper argues for a severing of the church and the State. This text is a basis for a manual for Reformed church government.
In Twofold Fatherland, an address delivered at the seventh annual meeting of the Free University, Amsterdam just after the Doleantie secession, we have Kuyper as an almost Lutheran:

A cursory read of this piece seems to suggest that Kuyper is promoting a two-realm approach. But digging deeper this is far from the truth. He does suggest that there is a fatherland above and below, but both are given by God’s grace - one by common grace, the other particular grace. Both are to give God the glory. The tension of hyper-spirituality (287), suggests Kuyper, is to devalue the earthly fatherland. He also posits that the earthly fatherland has been disrupted by sin and that there is a distinction between the (sinful) world and the earthly field of common grace.
The Lord’s Day  21 is taken from Kuyper’s E Voto Dordraceno - his commentary on the Heidelberg Catechism. This selection looks at three questions from the Catechism:

The essay State and Church is extracted from a two-volume work written for members of the Anti-Revolutionary Party in 1916, was written by Kuyper for party leaders who had had no formal academic training and was designed to provide clarification to Ons Program.
The final selection, the address on missions, provides a fascinating insight into Kuyper’s attitude to mission. These are verbatim notes taken from an address by Kuyper to a missions conference in January 1890. What we have here are Kuyper’s main theses and then a verbatim report. What is particularly interesting here is Kuyper’s stress that missions should be the work of the church and not of voluntary organisations as was primarily the case at the time.

The book closes with a detailed table of contents a brief section of biographical details on Kuyper and the contributors but not of the translators. There is also an extensive subject/ author index and a scripture index. The essays by Wood and de Bruijne serve as excellent introductions to the context and to the relevance of Kuyper’s essays.

Within these pages, we can see the distinctiveness of Kuyper’s ecclesiology, although not always fully spelled out. Here we can see the distinction between organism and institution, the key role of common grace, sphere sovereignty especially in that the church should be free from state involvement and the state free from church meddling, and the key roles of the church in looking beyond itself in mission, evangelism and philanthropy.

This book is a welcome addition to the ever-expanding publications of the Abraham Kuyper Translation Project. It deserves to be read widely as Kuyper’s conception of the church is not merely of historical interest only; his distinction between organism and institute provides an excellent framework for ecclesiology today.

This will undoubtedly be in my book of the year list for next year: 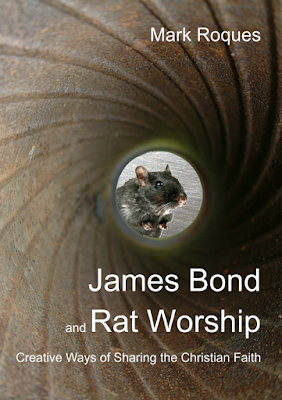 Books of the year 2016 - the long-awaited list (don't accept any other alternatives):

Keith Sewell
The Crisis of Evangelical Christianity
Wipf and Stock

James K.A. Smith
You Are What You Love: The Spiritual Power of Habit
Grand Rapids: Brazos Press

Mike Wagenam
Together for the World: The Book of Acts.
Lexham Press.

The title begs the question - does Calvinism need saving? And if so from who or what? This book is in some ways both a sequel and an introduction to Crisp’s other books Deviant Calvinism: Broadening Reformed Theology (Fortress, 2014), Retrieving Doctrine: Essays in Reformed Theology (IVP Academic, 2011), and Revisioning Christology: Theology in the Reformed Tradition (Ashgate, 2011) - although this one is much shorter and more accessible than its precursors.

The aim is clearly stated:

He uses the analogy of a house - much of modern Calvinism, often depicted as New Calvinism, only uses two rooms downstairs. Crisp’s goal is to open up the house. For Crisp Calvinism is broader than the TULIP five points. Although, he does look at each one of the five points
Calvinism is not the monolith most people assume it is - Crisp shows the diversity of Calvinism. Whether all Calvinists would agree is another issue! It is highly doubtful, for example, that this book would have been published by the Banner of Truth!
Crisp takes a fresh look at variants of Calvinistic theology. In chapters 2 and 3 he takes a look at election and freewill. Here he considers infra- and supralapsarianism and then draws upon Jonathan Edwards and John Giradeau. Girdeau opposed Edwards’ view of free will. (Crisp has dealt with Girardeau elsewhere (Crisp, 2014).) Crisp comments:

‘Even if Girardeau’s position is in some respects incomplete or underdeveloped, it does show that not all Reformed thinkers have been of one mind on the matter of theological determinism’

Crisp’s  discussion on God permitting evil is particularly stimulating - here he introduces the notion of skeptical theism, by which ‘we don’t know why God permits evil, but we can trust that there is some good reason for doing so’.
Crisp maintains that it is possible to be a universalist and a Calvinist:

‘it seems to me that one can be a Calvinist and a universalist. However, even if Scripture does not support universalism, it is still possible to think that the purposes of God in salvation are much more expansive than is sometimes reported’.

Not all Calvinists endorse penal substitution - again Crisp shows penal substitution is the favoured view of most Calvinists not all have adopted this perspective. He examines several other ways of understanding the atonement these include: satisfaction, as developed by Anselm of Canterbury; vicarious penitence; and penal non-substitution. Crisp sensibly advocates not one model but kaleidoscopic meta-model approach.
He then goes on to look at hypothetical universalism as supported by John Davenant and John Preston. Although Crisp doesn’t endorse it he makes an excellent case for it being consistent with Calvinism.
The book is eminently readable and deserves a wide readership. Crisp has certainly shown that Calvinism has a wide theological range and is wider than the traditional five points seems to suggest - even though the five points provide a good summary they are not a theological straitjacket. Crisp even suggests that: ‘Holding to all of the five points is not, in fact, a necessary condition for being a Calvinist’. Although I don’t agree with all the points Crisp makes, the book does make for a stimulating and thought-provoking read.

My review of several works by, on and about Kuyper are now published in Koers:

'Neo-Calvinism and the Church' is the theme of the 2017 Kuyper Conference
Rev. Dr. Timothy Keller of Redeemer Presbyterian Church, New York City, will receive the Abraham Kuyper Prize for Public Theology. The prize will be awarded at a ceremony in Miller Chapel on the seminary campus on Thursday evening April 6, 2017, at which Tim Keller will give a public lecture.
The annual Kuyper conference will address Keller’s theme and will take place from April 7 to 8. The conference will include plenary presentations by Daniel Bourdanné, Ruth Padilla DeBorst, Stefan Paas and John Halsey Wood, as well as concurrent sessions with juried papers on the conference theme.
The conference organisers invite papers on topics related to Neo-Calvinism and the church, to be presented in concurrent sessions. While we welcome proposals about the contributions of Abraham Kuyper, Herman Bavinck, and other Neo-Calvinists, proposals relating to the mission of the church today might range more widely.
Possible themes could include the distinction between church as institute and organism, the role of democracy in the church, the possibilities and problems of state and established churches, and the pluriformity of the church, as well as how the difference between particular and common grace shapes the church’s role in society. Financial support is available for graduate students through submission to the CFP.
To apply, please email a proposal of 250 words or less by December 31, 2016 to kuyper.conference@ptsem.edu. Please include your name and institutional affiliation in your email, but not on your proposal itself. Proposals will be double-blind peer-reviewed. Notifications of accepted papers will be sent by January 18, 2017. Please contact kuyper.conference@ptsem.edu for additional information.
Darrell L. Guder
Interim Director, Abraham Kuyper Conference
Emeritus Professor, Missional and Ecumenical Theology
Princeton Theological Seminary
at 9:14 pm No comments: Links to this post