John Lightfoot (1602-1675) was an Erastian member of the Westminster Assembly. He was the son of Thomas Lightfoot of Stoke-on-Trent. Lightfoot graduated from Christ's College, Cambridge in 1621 with a BA. He was ordained in 1623 and for a while was a curate in Shropshire where he met (Sir) Rowland Cotton. In 1626 he became the rector of Stone, Staffordshire. There he was married to Joyce Crompton. In 1628 they moved to Hornsey, Middlesex. In 1630 he became rector at Ashley, Staffordshire. He moved to London and in 1643 he became Lecturer at St Bartholomew's and then in 1644 rector at Great Munden, Hertfordshire.

The first part of his Harmony of the Evangelists was published in 1644.

He kept a record of the deliberations of the Westminster Assembly in his Journal of the Proceedings of the Assembly of Divines. This shows that he was favourable towards the Presbyterians but opposed to the Independents.

He was appointed Master of St Catherine's, Cambridge in 1650, in 1654 he became the Vice-Chancellor of the University.

He sided with the Presbyterians at the Savoy Conference in 1661.

Some of his writings are available here: http://www.prdl.org/author_view.php?a_id=395 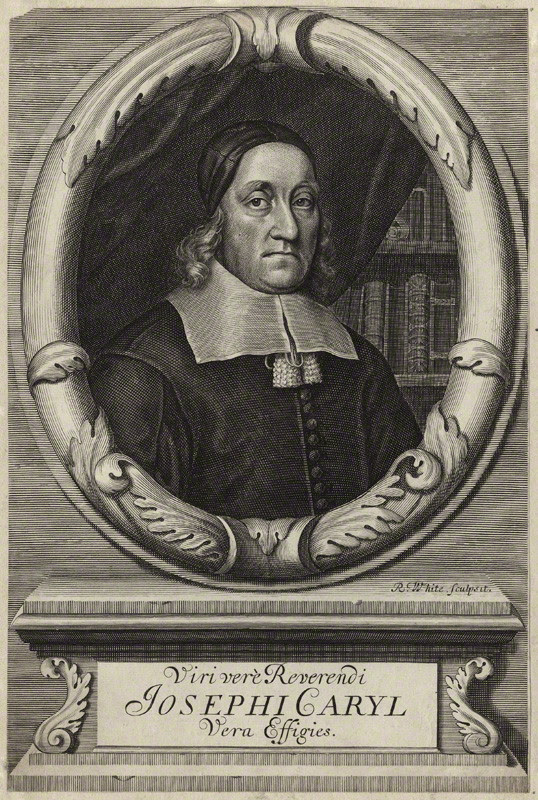 Joseph Caryl (1602-1673) was born in London and was graduate of Exeter College, Oxford. He is best known for his commentary on Job. He was often asked to preach before the Long Parliament and was one of the Westminster Assembly 'divines'.

After the restoration he was ejected from his church, St Magnus near London Bridge, but he continued to minister as an Independent (Conegationalist) in London.

Some of his writings are available here: http://www.prdl.org/author_view.php?a_id=196

John Trapp (1601-1669) was born in Croome d'Abitot and graduated from Christ Church, 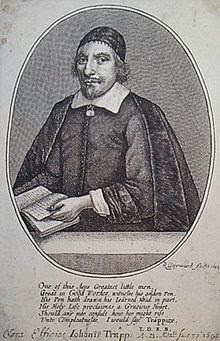 He sided with the government in the Civil War. During the Civil War he was the chaplain to the parliamentary troops in Stratford for two years. He was the minister at Welford-on-Avon from 1636-1660 and then from 1660 until his death.

Some of his writing can be found here:
http://www.digitalpuritan.net/johntrapp.html 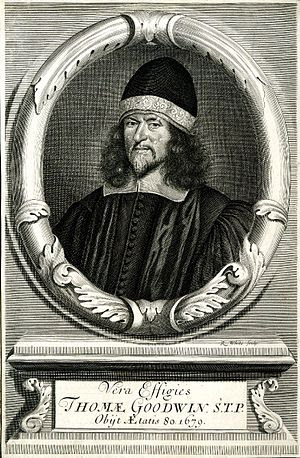 Thomas Goodwin (1600-1680) born in Rollesby, Norfolk, graduated from Christ's College, Cambridge in 1616 with a BA. At Emmanuel he was influenced by the preaching of John Preston and Richard Sibbes. During this time he wrestled with doubts about his faith, the lessons of  which are contained in his A Child of Light Walking in the Darkness.

In 1633 he resigned his clergy posts in Cambridge and became aligned with the independent congregationalist principles of church government. After marrying Elizabeth Prescott in 1638 he went to Arnhem and worked with Philip Nye (1596-1672) to make the church there a model of congregationalism.

In 1640 Goodwin returned to London and set up an independent congregation in the parish of St Dunstan's-in-the-East.

He was with Nye one of the independent representatives at the Westminster Assembly in 1643-52. Goodwin, Nye, Jeremiah Burroughes, William Bridge and Siddrach Simpson (1600-1655) were known as the 'Five Dissenting Brethren'.

Together with John Owen he helped to draw up the Savoy Declaration of Faith and Order.

Many of his writings are available here: http://www.prdl.org/author_view.php?a_id=311 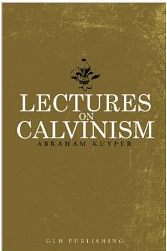 Another republished version of Kuyper's Lectures on Calvinism is available from GLH and on Kindle.


This is my first read of Kuyper, a famous Reformed theologian of the late 19 and early 20th century. His style is clear. His address of issues is direct. He raises and pursues questions that many do not even raise. He reasons in detail, sometimes one senses he infers to answer questions that may not have an answer. Still it is a worthy read. If one has ever wondered why there is so much discussion of covenants to Adam and Noah in the Reformed tradition, this text will help to explain why the topic is raised.

Robert Covolo's review of Bratt's biography of Kuyper is now online at academic.edu, as is his 2013. "Faith in a Fashionable Age: Abraham Kuyper and Charles Taylor on the Secular Nexus Between Mode and Modernité"  International Journal of Public Theology 7: 297–314.

And as has been mentioned before John Boer's translation of Abraham Kuyper's The Ascent of the Son - The Descent of the Spirit is available from lulu.com.

For a while he was a vicar in Norwich. He was one of the main Puritan influences in East Anglia. However, he came into conflict with the bishop of Norwich, Matthew Wren he went 'to Holland rather than conform'. He returned to England in 1642 and was an independent (Congregationalist) representative at the Westminster assembly.

Some of his writings are available
here:  http://www.prdl.org/author_view.php?a_id=166  and    here: http://www.digitalpuritan.net/williambridge.html

John Boer has translated Abraham Kuyper's The Ascent of the Son The Descent of the Spirit. It is now available for free from lulu.com. It comprises 26 Meditations on Ascension and Pentecost.

It is a translation of  Op den Pinksterdag (met Hemelvaart), volume 3 of his series Dagen van Goede Boodschap (Kampen: Kok, 1923. It was originally written in 1888 and published posthumously. 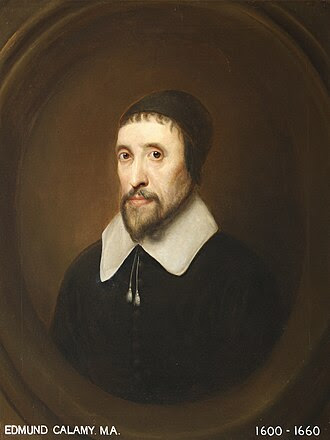 Father  and son (Jr)  were both ejected from their parishes during the Great Ejection in 1662. All three were educated at Merchant Taylors' School.
Edmund the elder was a chaplain to Nicholas Felton, the bishop of Ely and became vicar of St Mary's Swaffam Prior in Cambridgeshire. It was here worked with Jeremiah Burroughes.

He was an active member of the Westminster assembly particularly in the debates regarding church government.

Some of his writings are available here: http://www.prdl.org/author_view.php?a_id=1532 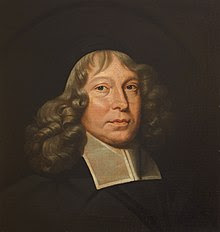 Samuel Rutherford (1600-1661) was born near Jedburg in the Scottish Borders. He graduated with an MA from Edinburgh University in 1621. In 1623 he became the Regent Professor of Humanity, teaching Latin. During bis time at Edinburgh he was involved with radical presbyterians. He had to resign his Edinburgh post when he got his future wife pregnant.

He became the minister of Anworth in 1627. Here he was involved with and organised presbyterian campaigns against royal ecclesiastical policy for which he was deprived of his charge in 1636. He was forbidden to preach and confined to the city of Aberdeen.
In 1638 the National Covenenat was signed and Rutherford became a leading Covenanter. he was appointed professor of Divinity at New College. St Andrews.
He was one of the main Scottish representatives at the Westminster Assembly (1643-1647). Other Scots included: Alexander Henderson, Robert Bailie, George Gillespie and John Maitland. During this time Rutherford wrote  Lex, Rex: or the Law and the Prince (1644)  The Due Right of Presbyteries (1644) and The Divine Right of Church Government and Excommunication (1646)
On return to Scotland he sided with the more radical Covenanters, the 'Remonstrants', against the more moderate 'Engagers'.
In 1650 when Charles II came to Scotland Rutherford addressed him on the duty of kings. In 1660 with the restoration of the monarchy under Charles II copies of Rutherford's Lex, Rex were burned, he was deprived of his university post and confined to his home. In 1661 he fell ill and died. His Letters were published posthumously.
Some of his writings are available here: http://www.prdl.org/author_view.php?a_id=484

Tobias Crisp (1600-1643) obtained a BA from Christ's, Cambridge and his MA from Balliol, Oxford in 1629. He married Mary Wilson at this time and had thirteen children. He was ordained and became the parson at Brinkworth, Wiltshire after a short time at Newington Butts, Surrey. He began his ministry as an arminian but became a high Calvinist;  he was a controversial figure and was accused of antinomianism.

During the Civil war he was forced to leave his parish and fled to London. It was in London he met with opposition from other Calvinists. Some have suggested this was die in part to Crisp's popularity as a preacher. He died in 1643 of smallpox.

Some of his works are available here: http://www.prdl.org/author_view.php?a_id=1330
at 10:03 am No comments: Links to this post 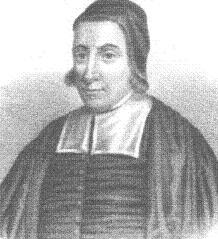 Hanserd Knollys (1599-1691) was born in Cawkwell, Lincolnshire. He studied at Catherine Hall, Cambridge where his contemporaries included John Arrowsmith, Thomas Goodwin. He was a school master at Gainsborough before being ordained. He became a minister at Humberston in. Lincolnshire.

During his time there he prayed for a widow who was at death's door - she was healed. In 1631 he married Anne Cleney. He became increasingly concerned about many Anglican practices and eventually gave up his living. He then doubted the validity of his ordination. During this time he met the Puritan John Wheelwright and Knollys came to a saving faith.

In 1633 Knollys was arrested for being a dissenter. He was let released and then made his way to Boston in Massachusetts in 1691. On the 12 week sail his only child died.

In 1641 he returned to England to care for his ageing father and returned to teaching. When the civil war broke out he briefly joined the army but soon became disillusioned and returned to London where he joined the Henry Jessey's congregation. There became convinced that infant baptism wasn't biblical. This led to the formation of the Particular Baptists. Two Particular Baptist congregations developed one led by Knollys and the other by William Kiffin.

Knollys rejected the Presbyterian model of church and adopted a congregational model. Knollys advocated a High Calvinism and a closed communion. He was unjustly accused of being an antinomian after signing the reprint of Tobias Crisp's sermons.

During this time the Particular Baptists experienced much growth. Knollys travelled around the country helping to set up many local churches.

After the restoration of the monarchy and Charles II came to the throne it meant persecution for many non-Conformists, Knollys included. He was imprisoned many times. He spent some time in Holland and in Germany but returned to London after two or three years.

In the late 1660s he wrote several books advocating a historical approach to Revelation. He became convinced that mystical Babylon was papal Rome. He was a post millennialist.
In 1670 he was again put into prison but was allowed to preach to the prisoners.

In 1677 the Knollys and the London Particular Baptists published a new confession of faith - it was published in 1689 when William and Mary ascended the throne. Knollys and Kiffin were the only two that signed both the first and second London Confessions.

He died in 1691 and was buried in bunhill Fields, London.

My article on kuyperania will soon appear in Koers, the full reference is: