More resources for a Christian approach to technology

In 2008 I posted a bibliography of resources for a Christian approach to technology (see also the list on all of life redeemed). Since then a number of great books, blogs and papers on the topic have appeared, including some I missed first time round.

These are a few of them:

Books
Derek Schuurman 2013. Shaping a DigitalWorld: Faith, Culture and Computer Technology. IVP.
Byron Borger has a review/ summary of the book here.
A website to support the book is here.

John Dyer 2011. From the Garden to the City: The Redeeming and Corrupting Power of Technology. Kregal.

Tim Challies 2011. The Next Story: Life and Faith after the Digital Explosion. Crossway.

Robert A. Wauzzinski 2001. Discerning Prometheus: The Cry for Wisdom on Our Technological Society. London: Associated Press.

Derek C. Schuurman 2007. "Forming a Christian view of computer technology." Journal of the Association of Christians in the Mathematical Sciences (ACMS).

Derek Schuurman "A summary of a Christian perspective on computer science"

Email ThisBlogThis!Share to TwitterShare to FacebookShare to Pinterest
Labels: bibliography

Gerald Vandezande on All of life redeemed pages

I have started a Gerald Vandezande page on All of life redeemed.

Here's an interview with him:

Why are we stewards of creation? by Jared Hyneman Christopher Shore 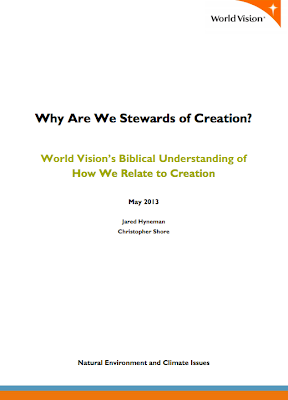 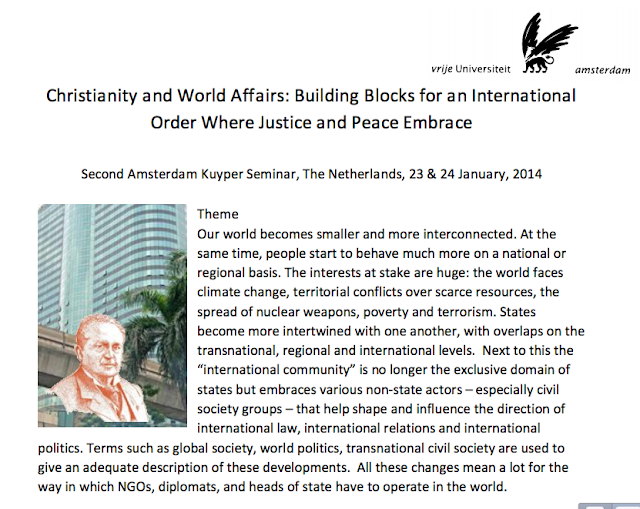 An introduction to Citizens for Public Justice

Religious decline in the UK: Blame parents not the churches

Here's a report on Voas's work, cited by Arthur, taken from The Edge June 2005: 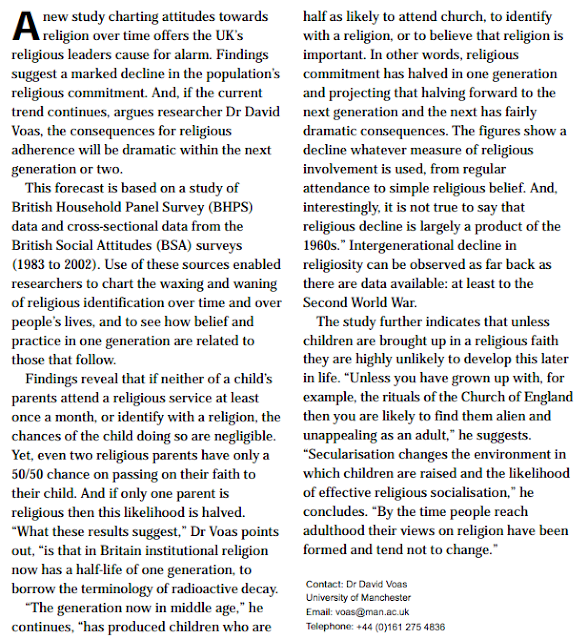 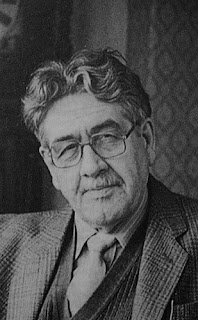 AMONG THE intelligentsia of Wales the name of R. Tudur Jones belongs to the most distinguished Church historian and theologian of the 20th century.

He was a prolific writer on both religious and political subjects, whose work is characterised by meticulous, wide-ranging scholarship, immense intellectual gifts, forthright judgements and, particularly in the case of his writing in Welsh, a profound sense of the beauty of language.

His contributions to the religious and literary life of Wales were many and varied, ranging from his histories of the Welsh Independents to his column in Y Cymro, one of the Welsh weekly newspapers, written over a period of 20 years or more.

Robert Tudur Jones was born at Llanystumdwy, Caernarfonshire, the boyhood home of David Lloyd George, and brought up in the seaside town of Rhyl in Flintshire, where his father was employed as a railway-worker and his mother kept lodgers who provided the boy with an insight into human personality and a fund of anecdote on which he never tired of drawing. He was educated at the University College of North Wales, Bangor, at Mansfield and St Catherine's Colleges, Oxford, and at the University of Strasbourg, and was a Congregational minister at Aberystwyth before his appointment in 1950 as Professor of Church History and later Principal of Bala-Bangor Theological College, where he remained until it was merged with the Memorial College at Aberystwyth in 1988.

His DPhil thesis at Oxford was on the Welsh Puritan Vavasor Powell, one of those whose mission was the evangelising of Wales under the Act for the Propagation of the Gospel in Wales of 1650. This set Jones on his life's work, which was the study and exegesis of that Radical Nonconformity of which he was such a notable examplar.

Apart from myriad articles in learned and denominational journals, his first major book was Congregationalism in England 1662-1962 (1962), which established him as a Church historian. It was followed by the magisterial Hanes Annibynwyr Cymru (1966), a history of Independency in Wales, one of the major strands of the Welsh religious tradition and still a potent force in contemporary Wales. It is required reading not only for the student of theological thought in Wales but for anyone with an interest in the history and society of post-Reformation Wales. He returned to this subject in Yr Undeb: Hanes Undeb yr Annibynwyr Cymraeg 1872-1972 (1975), a history of the Union of Welsh Independents.

His sympathy with the radical theology of the Independents helped R. Tudur Jones to embrace the political philosophy and practice of Plaid Cymru. He stood twice as the party's candidate at general elections in Anglesey, in 1959 and 1964, and was for a while editor of one of its newspapers, Y Ddraig Goch. His exploration of Nationalism in modern Europe, The Desire of Nations (1974), was an influential book placing the principles of Plaid Cymru in a wider context and with reference to world events.

He was also a journalist with a light touch in both Welsh and English. Indeed in a recent television interview, he told with some glee how the editor of a popular London daily newspaper, having spotted his articles in the Liverpool Daily Post, tried to cajole him into giving up his academic career in favour of a job as its Welsh columnist, which would have commanded a salary three times greater than what he was earning at the Theological College. But he turned the offer down, preferring to follow his own course as unpaid contributor to his church's journal Y Tyst and the leading monthly Barn.

A selection of his journalism, in which he gave full rein to his impish humour and imperious scorn for those of whom he disapproved, together with a number of his essays on cultural and historical themes, is to be found in the books Darganfod Harmont (1982) and Ffydd yn y Ffau (1993). One of his finest essays, in which he described how he'd thought he sensed the ghostly presence, in an Anglesey church at the time of the Dissolution of the Monasteries, of a posse of the King's Commissioners come to make an inventory of a nearby religious house, demonstrates a startling sensitivity to what such a visitation meant to those caught up by it. The essay appears, in English translation, in my recently published anthology of Welsh prose, Illuminations. A full bibliography of R. Tudur Jones's writings is included in the Festschrift, Y Gair a'r Genedl, which was published in his honour in 1986, the year in which he was awarded the degree of DLitt by the University of Wales.

The Protestantism and Puritanism of R. Tudur Jones was Evangelical in its precepts and application. He was a Calvinist and in the great schism that took place in the 19th century between the orthodox, Evangelical wing and the new Liberalism coming in from Germany, a controversy which still animates the religious life of Wales, he was firmly entrenched on the side of the fundamentalists. He wrote extensively on Abraham Kuyper , the theologian who became Prime Minister of the Netherlands in 1900, and was generally influenced by Karl Barth and the school of Barthians associated with Princeton University.

His Evangelicism is to be seen at its most learned in the two volumes, Ffydd ac Argyfwng Cenedl (1981-82), a history of religion in Victorian Wales, and at its most trenchant in Grym y Gair a Fflam y Ffydd, a selection of his essays and lectures on theological subjects, which is to appear next week in time for the National Eisteddfod at which R. Tudur Jones was a regular visitor. 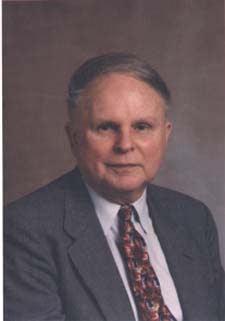 Robert D. Knudsen (July 1924 - 21 Feb 2000) taught apologetics from 1958 until his retirement at Westminster Theological Seminary. He also taught a course on the philosophy of Herman Dooyeweerd. The syllabus for one of those courses is here.

He also gave a course on "Calvinistic philosophy". Chris Bryant has done us all a great service by transcribing the discs, which no longer seem to be available in the WTS bookstore. The transcripts are available on his excellent blog here.

For more on Knudsen check out the excellent anthology of some of his writings Roots and Branches.

Kuyper: "The attempt to prove God’s existence is either useless or unsuccessful."

“The attempt to prove God’s existence is either useless or unsuccessful. It is useless if the searcher believes that God is a rewarder of those who seek Him. And it is unsuccessful if it is an attempt to force a person who does not have this pistis by means of argumentation to an acknowledgment in a logical sense.”


Dict. Dogm., De Deo I, p. 77.
Translated by Louis Berkof in Systematic Theology. Available as pdf here.
at 8:48 am 2 comments: Links to this post