The Entrepreneurial Vocation by Robert A. Sirico 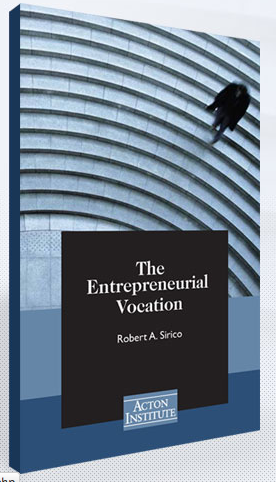 The Lord is my entrepreneur I shall not lack?

This is little book asks the right questions. I'm not sure it always gives the right answers.

Robert Sirico is a Catholic priest who co-founded the Acton Institute in 1990. He has written this book out of a concern for the church and the lack of understanding of economic principles. He writes with the aim of integrating the concept of entrepreneur and vocation. He is right when he writes:

While entrepreneurs should not be unfairly criticized for making money, they also must not be treated as victims of unjust discrimination who deserve a special blessing. However, it is also true that their chosen profession deserves to be legitimized by their faith. The public must begin to acknowledge the value of the entrepreneurial vocation, the wise stewardship of talents, and the tangible contributions of entrepreneurs to society.


He starts by highlighting the lack of insight many have regarding the integration of faith and business. Typical of many examples is this one Sirico gives:

I recall one man, a self-described conservative Christian, saying that he no longer attended church services because he refused to sit in the pew with his family and, in effect, be chastised for his business acumen. How many critical sermons can a small-business owner or investment banker hear before he or she loses heart and decides to sleep in on the Sabbath?


His analysis is correct. "An obvious reason for this ignorance is the astonishing lack of any economics training in virtually all seminaries." He may well be right, but is that the role of seminaries? Does this mean we should also provide science training in seminaries, and what about politics, art .... the danger then would be the seminary becomes a general education college. I would rather see seminaries equipping the pastors to be able to equip the rest of the saints. That may include some economics training, but better would be equipping in the tools to be able to critique the economic, scientific, political, .... ideologies.


I must also confess to being a little troubled by his 'principal argument':

The principal argument of this essay is that the pursuit of excellence, like the mind’s original constitution, discloses humanity’s ontological orientation toward the highest and most supreme good, namely, the perfect apprehension of God in heaven (cf. 1 Cor.13:12).


This sounds a little close to being neo-platonic.

He helpfully contrasts two views of the market the first held by 'religious leaders' as they pass the collection plate, is static and commands a Robin Hood morality; the other held by entrepreneur is of making rather than collecting money, the market is dynamic, a process rather than a place or object. This is obviously an over-characterisation. He makes this point to show that the 'clergy' must understand the market economy.

For those who think that the business enterprise is fuelled by selfishness and greed or that when entrepreneurs make economic losses they are getting their just deserts, this booklet will provide a helpful antidote.

He closes the book by taking a look at the parable of the talents and uses it to show how business and entrepreneurship are not no-go areas for Christians. As he rightly notes: "Entrepreneurs are the source of more social and spiritual good than is generally recognized."

There is much in this short booklet for careful and considered thought, it will provide the stimulus to think more carefully over these issues. The entrepreneur is a part of God's good creation and should be valued as such. The entrepreneurial vocation is just as much a vocation, a calling as being a priest, pastor or preacher.