Kuyper in the Church Times

John Gay reviews Kuyper’s On Education in the Church Times. 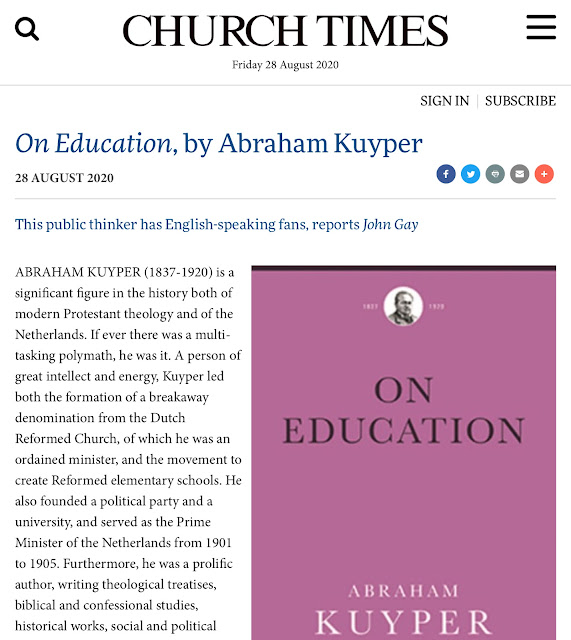 K.J. Poma's Scriptural Reflections on History translated by Harry van Dyke is soon to be published by Wordbridge publishing. 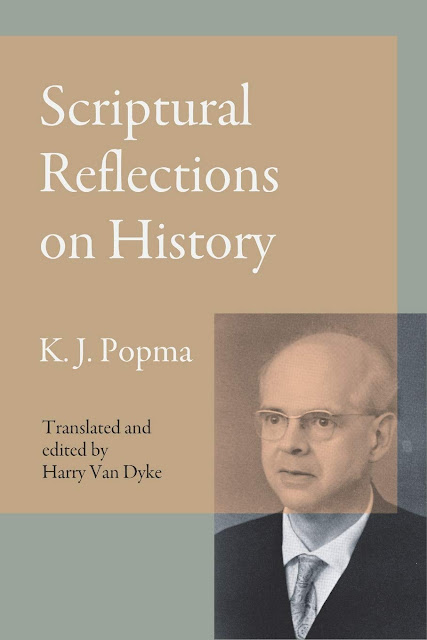 
Iron sharpens Iron (ISI) is all about sharpening up as a disciple of Jesus Christ. We are inspired by Proverbs 27:17 “As iron sharpens iron, so one person sharpens another.”

ISI is sponsored by LifeMatters, part of the ThinkingFaithNetwork, based in Leeds. It is completely free and open to anyone.
We are now living in a confusing, post-Christian society.
Today the vast majority of British people are secular. Secular people live as if there is no God and everything is just physical. Secular people have no fear of God and the pagan gods. Their horizons of happiness are thoroughly secular and materialistic. For some the focus is on watching football, drinking lager and watching television. For others it's opera, sophisticated chitchat and poetry. All this without any reference to God and His kingdom.

How should we as disciples of Jesus Christ respond to our post-Christian culture. Should we bury our heads in the sand and ignore it or do we sharpen up as disciples and engage with our complicated and challenging world?

ISI meets every fourth Friday of the month and our speakers present a short talk and then we discuss the topic in hand. We want everyone to contribute to the discussion. We encourage heated debate. We want to learn from each other so we can bear fruit for Jesus Christ, the Lord of heaven and earth. We are now meeting by zoom.

So far we have looked at the following issues:

If you would like to know more about ISI, when and where we meet, contact the convenor of the group Mark Roques.
mark@
at 8:41 am 1 comment: 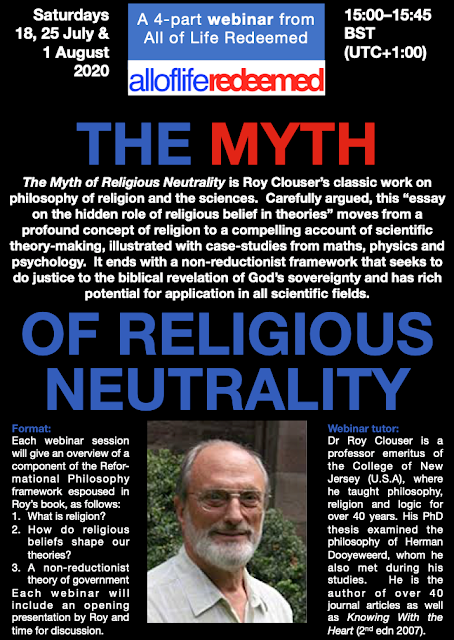 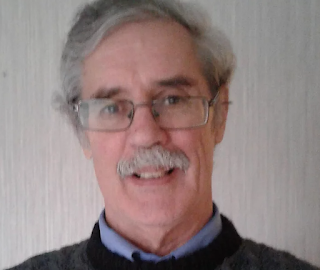 Chris Gousmett (Dunedin, New Zealand) is a retired information manager, having worked in that field in various government agencies. He has a PhD in historical theology, with a thesis on the relationship of anthropology and eschatology in the Church Fathers. He is now active in research and writing in Biblical studies, theology and philosophy, and translation of Dutch material into English.

He has recently established an e-book publishing venture to make new Reformational literature available, as well as re-issuing Reformational books now out of print. He is on twitter @chrisgousmett


Chris was kind enough to answer some of my questions.

Who or what are your key influences?
I suppose the most influential period was when I was at the Institute for Christian Studies in Toronto in the mid-1908s, where I completed a Master’s degree in philosophical theology. There I had the privilege of studying with Al Wolters, George Vandervelde and Bernie Zylstra, as well as with other staff, including Jim Olthius who was my thesis supervisor.

I suppose I was closest in thinking to Bernie, Al and George than to Jim, but one strong influence from Jim was the importance of anthropology (theory of the human person) for Christian thinking in every field. That has one way or another been part of most of my research projects ever since, most notably in my PhD thesis at Otago University, New Zealand, which explored the influence of anthropological theories on eschatology in the Church Fathers.

How did you come across Reformational philosophy?
An encounter with someone who shared an interest in a book I was reading led to discussion about Christian engagement with the wider world, and he told me about people he knew who were also interested in discussing such issues, and I was put in touch with them. I have often wondered how I could have come across Reformational thinking if it had not been for that encounter, as it is not very prominent in New Zealand or indeed most of the world, and that keeps me alert for opportunities to share about it with others who may be searching for more than they are currently aware of, given the limited exposure that Reformational thinking has even in Christian circles.

What do you feel are its strength and its weaknesses?
The strength of a Reformational vision for life (not just in philosophy) means that there is nothing that falls outside of the authority of Christ, and that is truly liberating in that we are not on our own in dealing with the consequences of the fall in our occupations, our leisure, our relationships.

I sometimes explain the difference between a Reformational vision and traditional evangelicalism by re-wording the Great Commission as it is actually understood in evangelicalism: “Some authority in heaven and earth has been given to me. Go therefore and make disciples of some nations,... teaching them to obey some of what I have commanded you. And surely I am with you some of the time, to the very end of the age.” A Reformational vision can see that “all” means “all” and can work this out in terms of everyday living.

Its weaknesses largely relate to the difficulties of communicating this vision in ways which people can readily grasp. For most people, it is so radically different that they struggle to comprehend the extent of what we are actually saying. Also, sometimes it can come across as a technical, intellectual approach that is disconnected from the issues people deal with every day. But a good part of that is the anti-intellectualist tendency in evangelicalism, and the Biblicist approach which insists on a specific verse to back up every assertion. And of course, many evangelicals see the issues we discuss as outside of the scope of Christian discipleship, and purely optional rather than something that gets to the core of life. The subjectivist tendency in evangelicalism also prevents people from seeing that this is something that they ought to grapple with, as it is only “your opinion” placed against other people’s “opinion”.

You have begun a new publishing venture - Thumbwidth Press (https://www.thumbwidthpress.net/). What are your dreams and hopes for Thumbwidth?

The goal for Thumbwidth Press is to have a website where e-books from a Reformational perspective can be made available to the public. Many younger people do not read hard-copy books that much any more, it seems, so I hope that publishing Reformational material in e-book format will be more accessible to them. I have a number of books in preparation for release as e-books, both new and re-release of Reformational classics to make them accessible for a new generation. The material I am seeking to publish is more introductory and exploratory than academic, perhaps explained as at the “worldview” level rather than the “philosophical” level.

You have also had published a new ebook dealing with COVID-19, Trusting in God during a global pandemic. Could you say something about why you wrote this and who is it aimed at? 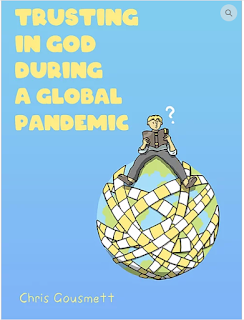 This book was written to help children and early teens (10-15 years approximately) to grapple with what is going on in the world around them, which must be a frightening experience for many. It seeks to answer the question, Where is God in all this, and how can I trust him when so many terrible things are happening? It explores how God is always trustworthy but that sometimes people do things which spiral out of our control into things like the pandemic. I seek to explain that people are responsible in many ways for the events that brought about the pandemic and its global impacts and that this is a manifestation of human sinfulness and disobedience to God resulting in consequences which could be more or less expected. I trust that children (and their parents) can be strengthened in their faith and trust in God through my little book.

What books are you reading at the moment?
I have just finished The Liturgy of Creation by Michael Lefebvre. This is an account of the creation narrative as structured by the ancient Hebrew liturgical calendar rather than by a chronological account. It explores how various events in the Pentateuch were given dates which do not correspond with the date on which an event happened, but with the sequence of festival celebrations and their relationship with each other. It is a fascinating argument and makes better sense of the dating in these books than attempts to connect them with a chronological calendar.

I am now working through The Unintended Reformation: How a religious revolution secularised society, by Brad Gregory. This explores how the dramatic social upheaval of the 16th century reformation led unintentionally to secularisation in many fields of human endeavour. It comports well with the Reformational view of how secularisation came about, and it would be a fascinating exercise to do a careful comparison of Gregory’s views with those of Dooyeweerd on the same issues. I suspect that Gregory would see Reformational scholarship as confirming many of his conclusions. I am eager to continue reading this book, as I have gained much from the first 50 pages and expect the rest of this book to be equally insightful and helpful. I think it should be required reading for any Reformational seeking to influence current society – it both gives in-depth explanation as to how things have got to be the way they are, and is a warning to be alert to the unintended consequences of what we are engaged in today.


What do you like to do for fun?
Now that I am retired I have time for a number of activities. I am building a model railway which I enjoy, and my son shares in that with me, helping to run the trains. My wife and I often invite friends for a meal and fellowship, and we enjoy walking and visiting beaches and other scenic spots, of which there are many here in Dunedin.

Richard Russell has over several decades been drawing and sharing numerous diagrams to illustrate Reformational philosophy.

For the first time they have been collected together in this volume. 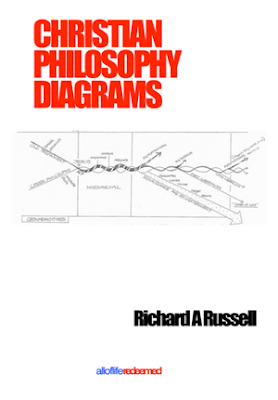 Craig Bartholomew on his visit to Indonesia